10 Things To Do in Connecticut This Fall (No Pressure) 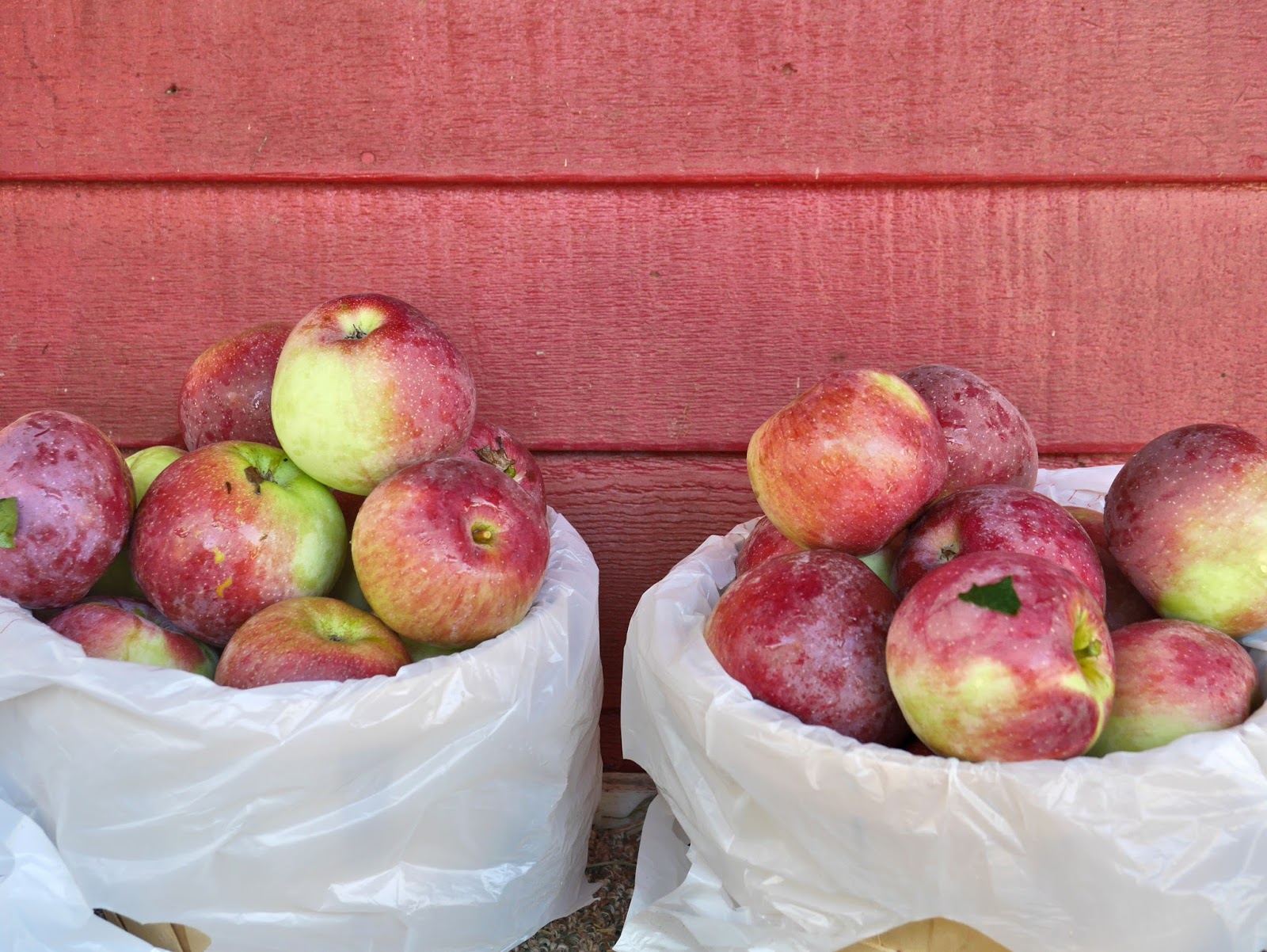 Remember in years past when everyone feared missing out on summer - that mythical, shimmering, relaxed yet activity-packed, summery summer? That era is over; summer has lost its FOMO-inducing glow. Fall has taken over.

Now, I love fall. (Except for the part where I turn a year older and the other part where I have to rake my lawn.) But lately, fall - or rather, the hype surrounding it - has gotten out of hand. These days, we can't just appreciate the foliage and buy a new sweater, we have to hoard sickly-sweet orange candles, expertly style a nursery full of mums on our front steps, sprinkle everything with pumpkin spice (which, come on people, is nutmeg and cinnamon, doesn't that sound a thousand times more appetizing anyway?), and go apple-picking in leather boots even though it's still 75 degrees out. And that's before we even get to Halloween, and the whole thing really goes into full faux-spider-web-covered overdrive. (It is interesting that Thanksgiving doesn't factor into the autumnal craziness too much; could it be because the holiday has mostly resisted commercialization?) The Fall Industrial Complex is real, and the pressure is intense.

And in Connecticut, the seasonal mania is especially strong, because while summer weather lasts for three months or more in a good year, fall weather - that perfect, crisp-but-not-cold, sunny, leaf-saturated, booties and scarf weather - lasts about two weeks. (Unless we get one bad storm in September or early October and skip straight from summer to snow.) Fall is limited edition, and limited edition products always come with especially frenzied promotion.

This year, the fall craziness began weeks ago, weather and the calendar date be damned, but now it's picking up the pace as a few signs of actual autumn have appeared. It's getting cooler overnight, pumpkins have started popping up at farm stands, and last week, in Litchfield County, I saw not only some orange-tinged branches but an entire grove of bright red trees.

So I thought I'd write a list. These fall suggestions, all of which I have done recently or hope to do soon, are ways to take advantage of the season without losing your mind over it. In other words, you could put on a $150 flannel shirt and Instagram these activities while jumping in a leaf pile, but you don't have to.

Eat all the apples.

I'm probably not going to be picking apples this year (and I'm definitely not going to be doing it while dressed like a fashion blogger) but I will certainly stop by some farm stores and grab some local apples and cider. (In fact, I already have the apples, from Scott's Yankee Farmer in East Lyme. They'll be going into my apple cake for Rosh HaShanah. The cider will come later.) The Connecticut Department of Agriculture has a listing of farm stores and stands by county.

I love visiting Connecticut wineries, both because they tend to be gorgeous and because, well, they have wine. And ever since first I stopped at the adorable farm market at Holmberg Orchards in Gales Ferry, I've wanted to try their wines. Unlike most local wineries, Holmberg produces mostly fruit wines and ciders. I've never gotten into these - I've always been strictly a red wine person - but if I'm ever going to like them, it will be on a pretty Connecticut farm in the fall. They're open for tastings Saturdays and Sundays from 12:00 p.m. to 5:00 p.m. through October.

Hike amongst the leaves.

I have a long list of Connecticut attractions I intend to get to someday, and not a few of them are hikes. Two in particular have been on the list for years and, more to the point, seem like particularly good bets for capturing fall foliage. (Because as much as I hate the whole leaf-peeping thing, I can't stop myself from trying to get some good leaf pics each year.) They are Mount Tom State Park in Litchfield, and Mohawk Mountain State Park in Cornwall and Goshen. Both involve towers. Hopefully I'll get to one; maybe I'll manage to get to both. But even if I have to stick to parks closer to me, I'm sure I'll spend at least a little time this fall in the colorful outdoors.

Go to a country fair or festival.

Growing up in Westport, fall was synonymous with the Apple Festival, which brought decadent food, crafts, student dance recitals, and campaigning politicians together in our local high school. The Apple Fest, as we called it, is no more, but other fall fairs and festivals live on elsewhere throughout the state. If you've never been to a traditional agricultural fair, the kind with animal barns, rides, tractor pulls, and fried dough, this is a must. Most of Connecticut's fairs end in late summer, but three take place in the fall: The Durham Fair, which runs from September 21 through 24 (here's my post on my visit to the Durham Fair last year); the Harwinton Fair, October 6, 7, and 8; and the Portland Fair, also October 6, 7, and 8. There are also festivals all over Connecticut, with themes ranging from apples to pumpkins to oysters to foliage to...well, just search for one near you, or by date, on ctvisit.com.

Browse in a garden store.

Last fall, I did the whole mums on the front steps thing. This year, because I plan to be traveling as much as possible, I might not. However, I do plan to go to to one or two of Connecticut's awesome garden stores (garden centers? nurseries? you know, the ones that aren't just a place to buy mulch and bulbs, but an experience) to take in the atmosphere and gaze at all the seasonal plants and gifts. I'm fond of Smith's Acres, but one of my other favorites, Salem Herbfarm, closed two years ago, so maybe this year I'll find a new favorite. (Any suggestions? Comment below!)

Get the beach to yourself.

Though summer is my favorite season, summer's favorite activity is my favorite activity to do in the fall. I avoid beaches as much as possible between Memorial Day and Labor Day, but as soon as they're FREE, nearly deserted, and neither too sticky nor too cold, I'm back. This fall, I'm sure I'll hit some favorites close to home, like Rocky Neck State Park in East Lyme, Hammonasset Beach State Park in Madison, Ocean Beach Park in New London, and Waterford Beach Park. But I'd also like to go back to Cove Island Park if I'm in the Stamford area, and maybe discover some new beaches, if there are any I haven't found yet.

Sneak in some day or weekend trips.

I know, I know, this isn't a something to do in Connecticut. But if you live here, this is the season to take advantage of living in a wonderful place that's also very close to many other wonderful places which happen to be crowded in summer and freezing (or nearly shut down) in winter. Among the places I'd like to return to are Long Island's east end, just a ferry ride away from New London; some Hudson Valley towns like Saugerties and Catskill; Providence; and Block Island. Some I haven't been to yet that I hope I can squeeze in are Boston's Harbor Islands; City Island, NY; and perhaps some new-to-me small towns in New Hampshire or Maine.

Stroll around some downtowns.

This is as simple as it gets, but Connecticut is packed with extremely pretty towns and historic cities that really come to life when you take the time to explore them on foot. And there's something special about walking around a town green or along an old-fashioned Main Street when it's cool enough to order a warm drink, but not too cold to consume it outside. I hope I have time to add some more City Walks and Town Center Strolls to the blog this season. I'd like to get back to Pawcatuck, New Milford, and Hartford, among many others.

Wander through a historic cemetery.

For some reason, I usually find myself in old cemeteries in summer, sweating and fighting off mosquitoes, or in winter, unable to read headstones covered in snow. (See: my trips to the Old Norwichtown Cemetery in Norwich and Cedar Hill Cemetery in Hartford.) But autumn is a far superior time to lose yourself in the details of the dead. It's a way to get that Halloween-y vibe without having to make a costume or go to a party with dry ice in the punch. Plus, weather-wise, fall is a much more comfortable time to go searching for notable graves in venerable little burial grounds or exploring some of the larger, park-like cemeteries built as serene public spaces for the living as well as final resting places for the deceased. Some particularly haunting options (among many) are Griswold's Kinne Cemetery, Bridgeport's Mountain Grove Cemetery, and Hartford's Ancient Burying Ground, but often, in New England especially, the best cemetery is the one you discover unintentionally by the side of the road.

Stretch out your summer.

Labor Day, the start of the school year, and the crickets chirping might make you feel like summer is over and gone. But many seasonal businesses stay open well into October - and sometimes beyond - and lots of stereotypically "summer" activities are just as enjoyable in the fall. Many of Connecticut's ice cream stands, for instance, keep serving frozen treats past whatever date you might imagine is your last chance to indulge. Lobster shacks, too, usually stay open, if with limited hours, into the fall. Captain Scott's Lobster Deck and Fred's Shanty in New London and Abbott's and Ford's in Noank stay open into October. Farmers' Markets get the most attention when their tables are overflowing with summer berries, but in addition to the larger markets that are open (usually indoors) year-round, regular smaller markets often extend their season into the fall. The Department of Agriculture provides a list of markets with dates, and there's almost certainly one open in September or October near wherever you may be going. Recently I got into a conversation about picnics, and realized they're also a summer staple that doesn't have to end in August. For a classy picnic option, grab some food at the Marketplace at Guilford Food Center in Guilford and eat on a bench on the town green. For an old-fashioned, rustic experience, get lunch at Heirloom Market at Comstock Ferre and eat at Wethersfield Cove. And for cheesy fun and a huge variety of food choices, shop at Stew Leonard's in Norwalk, Danbury, or Newington. Outdoor eating options for those towns include two spots that have been on my Connecticut to-do list for years, Calf Pasture Beach in Norwalk, and Tarrywile Park in Danbury. As for Newington, any excuse to go to the park with America's smallest natural waterfall, right?