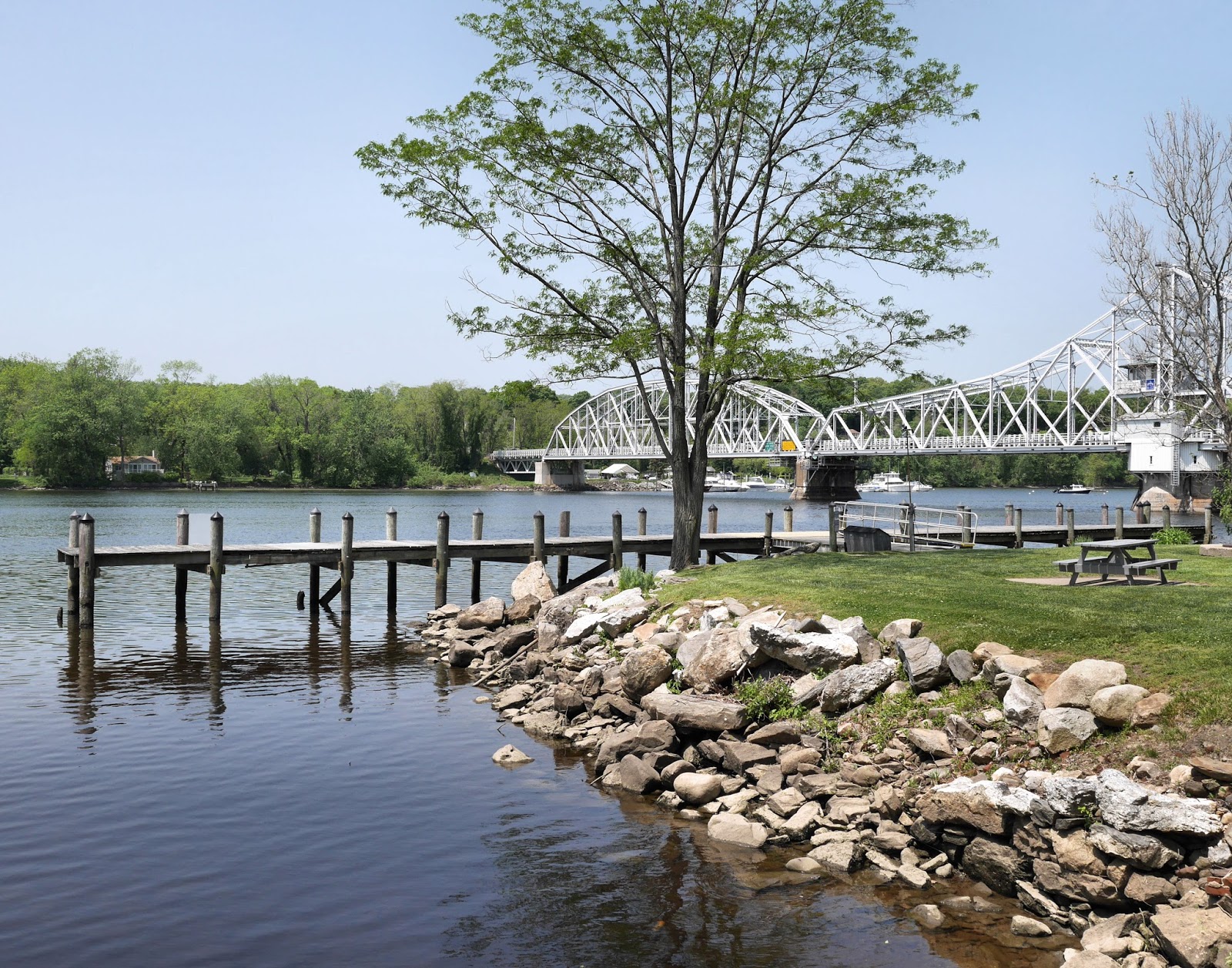 I have a bit of a love-hate thing with bridges. Some bridges, I find terrifying (there's no logic to it, but having skyway or spillway or causeway in the name doesn't help.) Other bridges are a pleasure to cross. And then there are the bridges I'd drive a day out of my way to avoid - I mean seriously, who invented this nightmare - but love watching other people traverse on YouTube.

But even though I usually wish I could magically transport my car to the opposite riverbank using the power of my mind, I can't deny the appeal of a bridge. It's not just that they literally take you to places you'd otherwise need a boat to reach, or that they symbolically represent the connection between sometimes very different places. It's also that they often look striking, lending a place an atmosphere it wouldn't otherwise have, and that they're a built-in alert message to bored drivers: Hey, something new and different might waiting for you right over there, on the other side.

I chose these five Connecticut bridges with some very simple criteria: they had to be attractive to look at - as you're crossing them as well as from below; they had to have some interesting facts, trivia, or history associated with them; and they had to lead to a place (or places) worth visiting in its own right. I could have chosen many other bridges with different points to recommend them, such as walkability or age, so if you have a different favorite, do leave a comment below.

It's not often that traffic comes to a dead halt at a seemingly random time of day and no one minds because the cause for the hold-up is so darn charming. It pretty much only happens when a line of fuzzy ducklings are crossing the road or when the East Haddam Swing Bridge is swinging. The truss bridge carrying Route 82 across the Connecticut opened to traffic in 1913. Since then, it has pivoted to allow boats to pass, while trapping motorists either in the quiet beauty of Haddam or in East Haddam's intensely picturesque town center.* According to East Haddam's website, which lists the bridge as an attraction, the "899-foot long bridge is reputed to be the longest of its type in the world." And its timing isn't quite random; it "opens to recreational traffic on the hour and half hour and on-demand for commercial barge traffic."

On the Haddam side, you'll find small villages where the distant past feels like just a little while ago and hidden history everywhere you turn. In East Haddam, there's the Goodspeed Opera House (I recently saw my first Goodspeed production and highly recommend the experience), Nathan Hale Schoolhouse, restaurants, independent shops, historic homes, and quite a lot more.

In a town (which is actually not a town) full of  tourist destinations, you might think a small drawbridge wouldn't earn the status of a beloved attraction. In Mystic, you'd be mistaken. People come from all over to watch the bascule bridge connecting the Groton and Stonington sides of Mystic go up, letting water traffic pass by and creating a waiting line of vehicles and pedestrians, then go down again. This 1920 bridge carried streetcars in its first few years of use; though those are gone, the bridge retains the look of a curiosity from another age.

There's an ice cream shop perfectly situated for bridge-watching, and downtown Mystic both east and west of the river is usually bustling with people shopping for everything from books to accessories or visiting one of a long list of highly rated restaurants. That's all as nice as it sounds, but as in many parts of Connecticut, the best part might just be wandering the waterfront and its historic neighborhoods. (Make sure to get off of Route 1 and see the side streets.) If you're exploring the area near the bridge itself, I strongly recommend leaving your car and walking; other major highlights like Mystic Seaport and Mystic Aquarium, as well as Olde Mistick Village, are slightly further away.

The bridge that carries Route 185, aka Hartford Road, across the Farmington River is officially named the Bataan Corregidor Memorial Bridge, but I've never heard anyone call it that. I've never heard anyone call it anything. It's not grand or long or high. It's not ornate or particularly old (it dates from 1947.) Yet as soon as you spot it, you're instantly struck with a sense of calm and an appreciation for the simplicity of the countryside. This is not one of the scary bridges. And Simsbury is not exactly the countryside - it's a large suburb, and Route 185 is the domain of numerous stressed-out commuters. But the town is a perfect example of how rural and suburban can blend so nicely in Hartford County, and this humble green steel bridge seems to tie it all together.

The main (if not the only) reason people normally visit this bridge on purpose is located in the little park across from Nod Road. It's easy to drive over the bridge multiple times and completely miss this attraction, despite it being very, very big. It's the Pinchot Sycamore, and at 23 feet, 7 inches in circumference, it's Connecticut's largest tree. After you see the tree, cross the bridge to Hopmeadow Street to find Simsbury's historic and bustling downtown. Or head to Rosedale Farms and Vineyards, a favorite of photographers looking for that perfect winery shot. And then, of course, there's the Route 185 Bridge's more famous relative, the gorgeous Old Drake Hill Flower Bridge. Simsbury is a great place to walk, and if you're biking, it might be even better.

Perhaps the most picture-ready of Connecticut's covered bridges, and right up there with those in other New England states too, this barn-red wooden covered lattice truss bridge crosses the Housatonic River in Litchfield County. Though this bridge was built in the late 19th century (and modernized in the 1960s and '70s), a series of earlier bridges have connected the small towns of Cornwall and Sharon (West Cornwall is a part of Cornwall) since sometime in the late 1700s. At 15 feet wide, the bridge can only accommodate one car at a time, so drivers on Route 128 (also called the Sharon-Goshen Turnpike) have to take turns. This works out remarkably well, considering how dangerous it seems when you first encounter the system, and adds to the quaintness of the whole experience.

The area surrounding the bridge is simply beautiful (the phrase "unspoiled by time" may pop into your mind as you drive.) On the Cornwall side, you can still see the building once used as the toll house (which I mentioned in my post about the toll house in Plymouth.) It now houses one of a handful of businesses clustered together on these pleasantly curving roads. Drive the other way, towards the New York border, and you'll reach the center of Sharon,* a classic Connecticut small town laid out so its buildings charmingly line up around the green and continue temptingly down little side-streets.

The delicate, sky-blue Arrigoni Bridge often comes up in rush-hour traffic reports, but when it's not bothering delayed central Connecticut commuters, it's a lovely landmark that can be appreciated from many vantage points. Completed in 1938, this through arch bridge connects a city known for college students and cupcakes to a town that mostly remains off the tourist radar. Its gently curving steel outline seems to float above Route 17 and Route 66 as they cross the water, and at almost 50 feet wide, it manages to evoke the wide-open sort of river crossing you might expect to find in the Midwest rather than spanning the Connecticut River.

Portland, small in population and not-so-small in area, boasts some architectural surprises (two octagon houses in a row!) and looks like a graceful mix of old river city, comfortably blue collar town, and former industrial center. (The main concern was the brownstone quarries, which provided the raw material for landmark buildings in numerous major East Coast cities.) On the other side of the bridge is Middletown, home of Wesleyan University and numerous cultural institutions. For specifics, click to see why I included Middletown in a previous "Top Five" - 5 Underrated Small Connecticut Cities. From the riverfront near Middletown's broad, welcoming Main Street, you can see traffic crossing the Arrigoni Bridge up above. And you'll also see the bridge if you glance up from Route 9 at that strange moment when it morphs unexpectedly from a highway to a local road complete with traffic lights. This arrangement may be changed eventually, because it is ridiculous, but for now, it's a uniquely weird Connecticut driving experience.


*The town centers of both East Haddam and Sharon are high on my list of places to write proper blog posts about in the future!