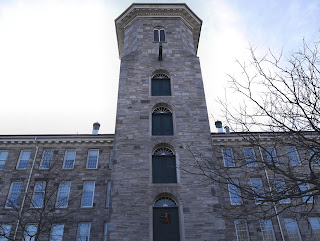 Many small (and not so small) Connecticut towns once revolved around their mills. I'm referring not to the humble grist mills of the early English settlers, but to the stone and brick behemoths of the Industrial Revolution. Though the industries that brought them to life have mostly moved away now, these imposing buildings still dominate a landscape that ranges from urban to rural. They have been called Connecticut’s cathedrals.

There are many worthy mill towns to choose from, and it was difficult to pick just five. Rest assured that on any aimless drive through the Nutmeg State, especially its eastern half, you're very likely to encounter a mill building, whether crumbling or newly restored, standing beside the rushing river that once powered its machines. It's also probable that you'll see, whether you recognize them or not, the houses that were the bosses' stately mansions and the rows of cottages where workers lived. I picked these five towns because each has a distinct atmosphere and shows off its historic mills in a different way. And, they are all located close enough to one another that it would be easy to combine them into a self-guided, mill-themed tour, to be done in one jam-packed day or stretched out over a week.

Willimantic, which feels like a funky little college town, is probably best known for its frog bridge. As you cross it, you notice that the famous frogs are posed atop spools of thread - that's because this place, nicknamed Thread City, was once home to multiple cotton mills, including the American Thread Company, at one time the state's largest employer. The Windham Textile and History Museum - also called the Mill Museum - offers a glimpse into the world of a 19th century mill village. Inside former American Thread Company buildings, original machinery and re-created living quarters recall the lives of mill managers as well as immigrant workers, who came here from all over Europe and beyond. Exhibits explore various aspects of the textile industry in Connecticut and America. While you're there, don't miss Windham Mills State Heritage Park.

Apart from its industrial history, there's usually something going on in Willimantic, from Victorian house tours to street festivals. And there's always something interesting to see. Add the Connecticut Eastern Railroad Museum to your itinerary, stroll down the colorful Main Street and stop at some stores and restaurants, or peruse willimanticdowntown.org for more ideas.


Putnam is an old-fashioned small town that's increasingly becoming known as an antiques and arts destination with an ever-expanding list of new restaurants. It also has two lovely short walking trails, one focused on the mills that once harnessed the power of the Quinebaug River and the other dedicated to that river and its impressive falls. The River Mills Heritage Trail winds for just over a mile past six historic mill buildings, where workers transformed yarn into cotton cloth. Some of these buildings have been, or are being, restored and re-purposed. The River Trail, two miles long, provides a different vantage point for viewing the town, the Quinebaug, and the waterfalls. The two connecting trails are clearly marked, but this (PDF) map, also available at many downtown merchants, shows the details.

Downtown Putnam is small and very walkable, with plenty of free parking. You can't miss the large antiques stores that dominate the area, but there are some sweet smaller shops and art galleries here too. There's also the Bradley Playhouse, and a cute little farmers' market on Saturdays. Though it's still somewhat of a bare-bones site, discoverputnam.com will give you an idea of your options. And from Putnam, the relatively bustling center of Connecticut's Quiet Corner, it's just a short (and stunning) drive to the even quieter towns like Woodstock and Pomfret.

Plainfield might sound agricultural and look unassuming, but this town once clanged with the sounds of heavy machinery from the mill villages that now anchor separate historic districts here. The Lawton Mills, Central Village, and Wauregan Historic Districts all preserve a slice of 19th and 20th century industrial life, complete with imposing mill buildings and their accompanying housing. In Lawton Mills, Railroad Avenue will take you to what feels like a town paused in time. In Central Village, the brick Plainfield Woolen Company Mill (listed separately on the National Register of Historic Places) stands proudly on Main Street. In Wauregan, further north, you'll find the old mill  by following Wauregan Road towards Chestnut Street.

These historic districts are not tourist attractions, but neighborhoods where regular people sill live and work. Although there are signs indicating their locations, you have to do some research on your own to know which streets to look for and which buildings to note. If you're into that kind of thing, the National Register of Historic Places registration and nomination forms for Lawton Mills, Central Village, and Wauregan will tell you everything you need to know. You won't regret taking the time; with a little imagination, Plainfield - the most off-the-beaten-path of the five towns listed here - might provide the best idea of what it was truly like when New England buzzed with looms and spindles.

Coventry, better known as the birthplace of Nathan Hale and host of Connecticut’s largest farmers’ market, has preserved what remains of its old mills in a unique and understated fashion. Find Mill Brook Park and the Mill Brook Park Trail, located right behind Main Street. Here, a little trail (if it can even be called that) meanders through peaceful woods and wetlands. Markers inform visitors about the eerie ruins of the former shoddy mill and the stone arches that were once part of a center of industry along the brook. The site of the dam, along with a few remaining buildings and brick chimneys, might help you imagine the shoddy mill, silk mills, and many other mills and factories that were once here. Or, you might find it almost impossible to picture this spot as anything but rural and serene.

While in Coventry, you can tour the Nathan Hale Homestead and experience the Coventry Farmers' Market, or follow a historic walking tour. Browse the antique stores on Main Street, or stop at the Visitors' Center at 1195 Main Street for more ideas.

Some of Connecticut’s old mills (including a few in Manchester) are gloriously dilapidated. (The old American Writing Paper Company building is one.) But many others have been preserved for their historic value and/or converted to condos, offices, or modern factories. Perhaps the best place to see both types of preservation is in Manchester. This town, home of the nation’s oldest woolen mill (they made the wool for the suit George Washington wore to his inauguration) has transformed vast complexes that once produced silk and paper into rental apartments and historic sites. The Manchester Historical Society has information about the Cheney Brothers National Historic Landmark District, in which you can find the Cheney Brothers silk mill buildings, now apartments with names like Lofts at the Mills, Ribbon Mill Apartments, Clocktower Mill Apartments, Velvet Mill, and Dye House. The district also encompasses several Cheney family mansions and hundreds of houses, plus facilities like schools and churches, that were constructed for use by the employees of the Cheney mills and their families. The Historical Society conducts walking tours, or you can explore the 175 acre district on your own. A few minutes away, the Hilliard Mills complex (that's the manufacturer of President Washington's suit) now houses businesses, and the old Adams Mill is home to a restaurant and banquet hall. To get a different sort of look at Manchester's mills (including the one in my American Writing Paper Company link), some are visible from the hiking trails along the Hockanum River.

Manchester - sometimes called Silk City - has a nice main street for wandering. The Manchester Historical Society lists other local museums and places of interest. And don't leave without going to the amazing Wickham Park (yes, I once wrote a blog post about Wickham Park. It's mostly pictures.)


If you've read this far and still want more historic mill villages to visit in eastern Connecticut, check out Stafford Springs (in the town of Stafford), North Grosvenordale (in Thompson), Rockville (in Vernon), and Taftvile (in Norwich.)

And if you have your own favorite, please leave it in the comments!
Posted by Johnna Kaplan at 8:20 AM