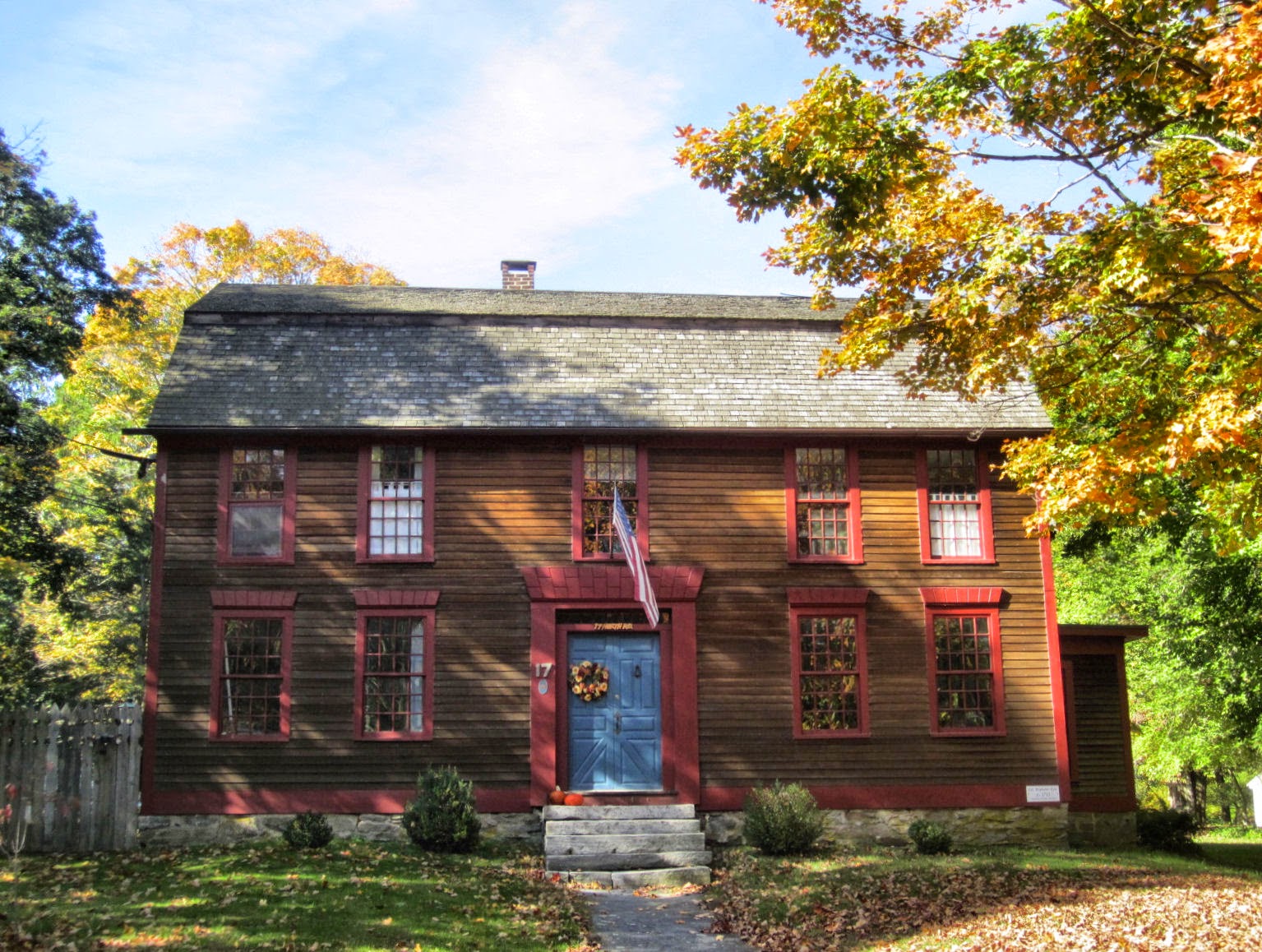 Don't worry, this is not another post about fall in New England. I'm simply using this classic Colonial, complete with pumpkins, American flag, and changing leaves, as an introduction to one of the stranger moments in Connecticut history.

The 18th Century can seem like a simple time, an era of symmetrical windows and Redcoats in a row. But that image leaves out the Pennamites and the Iroquois. It forgets King Charles II's abysmal grasp of geography. And it can't explain how a slice of northeastern Pennsylvania briefly became part of Litchfield County.

This house, located in Windham and built some time around 1705-1715, belonged to Eliphalet Dyer. Dyer was a lawyer, a Yale graduate, a Connecticut judge and legislator, a militia officer in the French and Indian War, and a delegate to the Continental Congress. But as far as this post is concerned, those parts of his resume doesn't matter. What's relevant here is that Dyer was a founder of the Susquehanna Company.

The Susquehanna Company was a group of Connecticut men who banded together in 1753 to settle and develop Pennsylvania's Wyoming Valley. The land, they believed, was pretty much theirs already; it had been granted to the Connecticut Colony in the Charter of 1662, which essentially defined Connecticut's shape as what you would get if you took a map of today's Nutmeg State and extended its northern and southern borders westward to the Pacific Ocean. But there was a problem. The cartographically challenged King Charles had also granted that piece of Pennsylvania to William Penn in 1681. And of course, as always, there were various Indian tribes living there already; in the late 1700s, the most powerful of these were the nations that comprised the Iroquois confederacy.

The Connecticutians' plan was to split the Valley into five townships, with each township providing land for 40 settlers and their families. (Digression: If each settler had a wife and 2.5 children, that would be 180 people living in a town roughly the size of New London. If each couple had five children, that would provide each township with 280 residents. If a "family" included a couple, their five children, both sets of their parents, and a spinster aunt with a cat, their town welcome sign would read Pop: 480. Not counting cats. In any case, these people were not big on population density, which is why they wanted to get out of Connecticut in the first place: too many people, not enough farmland.)

The initial Yankee foray into northeastern Pennsylvania began in 1762. There were conflicts from the start, and one particularly violent clash sent them back to Connecticut for several years. But when they returned in greater numbers in 1769, and built the townships of Pittston, Plymouth, Wilkes-Barre, Nanticoke (later Hanover) and Forty Fort (later Kingston) the first Yankee-Pennamite War - or Pennamite-Yankee War, if you prefer - was on. (Pennamite was the name given to Pennsylvanian settlers who, like the Connecticut settlers, believed that their royal charter and their purchase of land in the wild Wyoming Valley from Iroquois representatives gave them the right to settle there.)

While all this was happening, a little tiff called the Revolutionary War was breaking out. So before the Second Yankee-Pennamite War could happen, the Yankees and Pennamites had to team up and fight the British! Actually that's not really what happened. This gets complicated, but the short version is that the enemy of one's enemy is often one's friend, so in 1778 the Connecticut settlers, defended by a few Yankee officers on leave from their positions in the American army, were attacked by Tory troops, their Indian allies, and a few Pennamites.

This was the Battle of Wyoming, in which the outnumbered Yankees were outsmarted and defeated by the Loyalist-led troops in a half-hour of combat that was eclipsed in popular memory by the massacre and flight that followed. (If that sounds vaguely similar to the Battle of Groton Heights, it is - the Loyalists were even led by a man from southeastern Connecticut.) The battle was romanticized in the poem Gertrude of Wyoming, which places flamingos in the Pennsylvania skies and may have inspired the naming of a certain western state. Today, there is a granite monument at the gravesite of the massacre's victims in Wyoming, PA. (This is about three hours and twenty minutes from Hartford, if anyone else was wondering.)

To make a long and tragic story short, once the Revolution was over the Yankees and Pennamites picked up where they had left off. Since their disputed land was now part of the United States of America, it was up to Congress to sort them out. In 1784 it was decided that the Wyoming Valley would be part of Pennsylvania, but there were still questions about the ownership of the homes and farmland there. Pennsylvania's government ordered the Connecticutians to give up their claims and get out, sending rangers to forcibly remove them. Second Yankee-Pennamite War, anyone?

Obviously, Connecticut and Pennsylvania are not still fighting today, so something must have eventually happened to stop this. In 1786, a compromise was made that let the Yankees keep their Wyoming Valley land and become citizens of Luzerne County, Pennsylvania. Connecticut finally gave up all claims to land in the region in 1799.

Eliphalet Dyer, I should note, was not actually among the Wyoming Valley settlers. He had helped to initiate and promote the Susquehanna Company's venture, even traveling to England at one point to attempt to secure British support. But when not traveling in service to his state or country, he chose to live in Windham, because Connecticut is better. Just kidding, Pennsylvania, just kidding...


Delaware, Nanticok
Posted by Johnna Kaplan at 8:10 AM