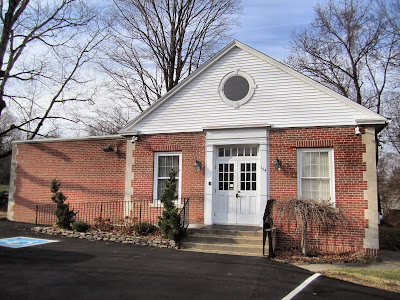 What can you say about Wolcott, really?

You can point out that it used to be called Farmingbury (Waterbury + Farmington) until 1796 when Lieutenant Governor Oliver Wolcott cast a tie-breaking vote in the General Assembly and an independent town was born.

You can talk about how it's not exactly the most exciting town in the world, and how people there are probably just fine with that.

You can link to this.

You can suggest that this is not the most navigable of pages, and that the name Woodtick Recreation Area is a little off-putting.

You can say that the Board of Education is housed in a 1929 schoolhouse building (above), and that there's another old schoolhouse in town, which is more historic, but sadly not particularly aesthetically pleasing.

And then you, by which I mean I, might decide that was about it.


On another note, the blog has a new look today. I had been wanting to change it to accommodate larger photos for a while years now, and as luck (?) would have it, I inadvertently did something to the template yesterday which messed it up in such a way that I had to re-do the whole thing right then. Come to think of it, this is how most important changes in my life are accomplished...