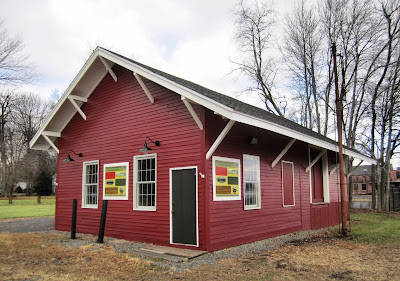 Growing up on the shore, train tracks meant coastal routes and train stations meant towns on the Sound. Sure, there were those little connecting branches that snaked mysteriously north and often had to be replaced with bus service. But they were inconsequential, their names meaningless words in announcements I didn't have to listen to.

I would probably have continued to think that way if I hadn't moved back to Connecticut, started exploring the inland parts of the state, and found, everywhere I went, evidence of bygone train service. From Putnam to Wallingford to New Milford, there they were: little depots, sometimes converted into restaurants and shops, and sometimes - like this one, in the Milldale section of Southington, which stands beside a section of the Farmington Canal Trail - preserved for educational or simply aesthetic purposes.

I knew that people once traveled throughout Connecticut by train, and that freight service continued on many of those lines long after passengers had moved on to more modern forms of transport. I saw that the train stations inland looked no different from the coastal ones I had been passing all my life. Yet they were exotic to me still, like finding an abandoned seaport in a desert or seeing a car rusting away deep within a road-less forest.

In a way, they still are.
Posted by Johnna Kaplan at 8:30 AM