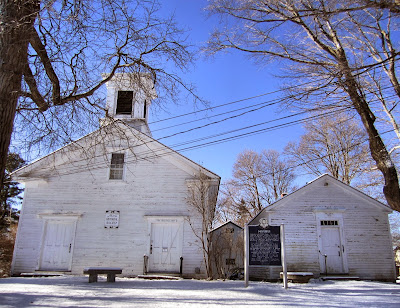 I was driving home the long way, I mean the really long way, the way you take when you don't want to get lost, exactly, but you're willing to risk it for the chance to see something you've never seen before.

This was not the story-book Connecticut, with towns like wood-cuts; it was too remote for that. This was the Connecticut where you can never quite figure out whether you're heading west or east, where snow coats everything but a strip of black pavement and the most jagged of the peaks of rock that line the roadways, where dustings of white powder fall from branches above and spiral down in little  snow tornadoes. This was that almost fairy-tale Connecticut, where frozen lakes and snow-coated dams with little brick guardhouses that would be iconic anywhere else feel forgotten, unobserved. The Connecticut where you drive ten minutes in the wrong direction due to a road closed for construction and it feels like an hour.

As I drove, the radio was playing. Voices were talking about the Connecticut everyone thinks they know, because it has been almost exactly a year. And I drove through Morris, and I saw this old town hall building, and this old schoolhouse. And I sat for a minute, unable to turn off the story I have spent a year unable to turn off. And then, for just a minute, I left it, and got out into the quiet cold, and stood surrounded by the snow.