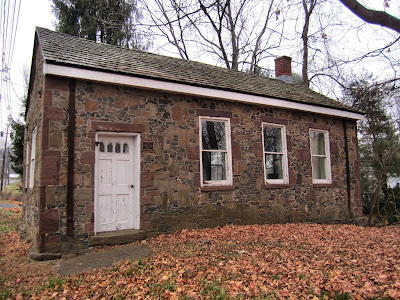 Oh, look what I found. The Southwest District School in Bloomfield. Built in 1858, from local traprock, and sometimes called the Stone School. 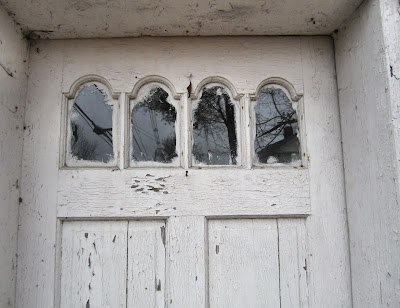 One thing you notice when you take lots of pictures of old schoolhouses is that quite a few of them are located in places no one would dream of building a school these days. Of course, many of the one-room schools remaining today have been moved, and are found far from their original locations. But some - like this one, as far as I can tell - have not. And so you see these small schools standing two feet from busy roadways, or on hills above rocky streams, or in other situations that just make you say "But who will think of the children?!"

Back then, I suppose, towns populations were smaller and distributed differently, vehicles were slower, and children were tougher, walking uphill to school both ways. 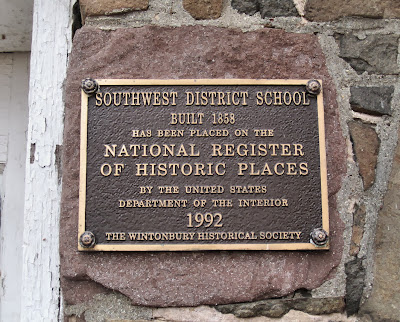 Names like "Wintonbury Historical Society" must confuse the pants off people who show up here from elsewhere and read signs. ("Wintonbury? But I thought this was Bloomfield!" "No, it's Simsbury, we're on Simsbury Road." "It is not, it is Bloomfield. Or Wintonbury." "This is going to be like yesterday when you said we were in Beacon Falls but it was really Falls Village, which isn't even an actual - anyway, you remember how that turned out. And there isn't a town of Wintonbury in this damn state, look at the map, it doesn't exist.")

Wintonbury was the name of the parish established here in 1735. (The town of Bloomfield was incorporated 100 years later.) The name Wintonbury is one of those playful little Harwinton-like deals: Windsor + Farmington + Simsbury. The would-be parishioners of Wintonbury needed their own church because, echoing founders of all of Connecticut's towns ever, it was too damn far to walk to their existing church. (They were also afraid of the Indians they might encounter on their six-mile Sunday journey.) It's amusing now, but the fact that they put up with walking six miles to church through the snow for any length of time amazes me. It also explains why their kids were bad-ass enough to spend their recess playing in traffic...

Posted by Johnna Kaplan at 8:30 AM