The Prospect Before Us 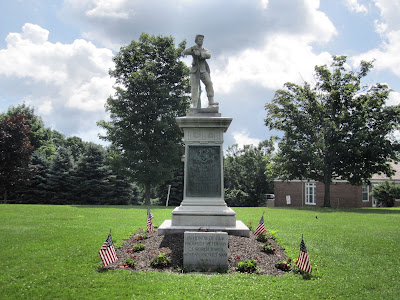 Two things you have to know before I start talking about Prospect. One is that it bills itself as the Best Small Town in Connecticut because of a grudge it holds against Connecticut Magazine, which years ago named it among the worst. The other is I once sort of called the mayor of 35 years a liar on the radio. See, there's this claim that because more of the soldiers Connecticut sent to the Civil War came from Prospect than from any other town, there is a law mandating that every municipality in the state name a street in Prospect's honor. This is not true. First of all not every Connecticut town has a Prospect Street. (Although many do, because of all the hills.) Second, a very high percentage (possibly even the largest in the state) of Prospect's registered voters did fight in the Civil War. But that was only somewhere around 75 men.* Third, there is no Prospect Street law, although as a reward for its high percentage of Civil War enlistment, the state legislature did approve a grant to help Prospect erect a war memorial. (It's the one in the photo above.)

There's also another odd Prospect belief, namely that Waterbury was once a Prospect suburb. I've never heard anyone say that in real life, so maybe the myth has died out. However, people frequently claim far wackier things, so it wouldn't surprise me if someone somewhere was still clinging to it.

Anyway, it was with slight trepidation that I ventured into this town for the first time. Not that I thought officials with "Best Small Town" stickers on their cars were going to come after me, but still. I was nervous. So for safety I brought my mom. No one would be aggressive to anyone who had my mom around, because she's sweet and very tiny. The slightest flooding of the Connecticut River at Hartford would wipe her out.

So we went to Prospect (which does not have a Prospect Street) and it is indeed built upon an impressive hill. In fact, Prospect Green is located on the highest inhabited elevation in New Haven County! Which is pretty cool, and I think they should go with that as their claim to fame. Seeing as it's true.


*Whose service is not diminished by the fact that, say, Killingworth, does not have street named after their hometown.
Posted by Johnna Kaplan at 7:45 AM