The Union Society of Phoenixville 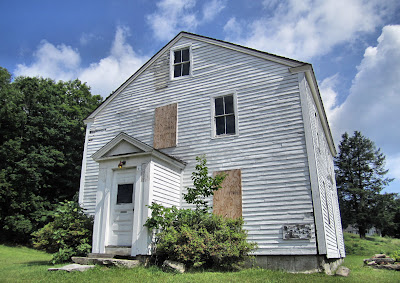 When I lived in Putnam and had to get to central Connecticut, I usually chose the route that passed through Phoenixville, an old mill village that long ago lost its mills. Phoenixville is in the town of Eastford, but for a long time I'm not sure I knew there was a town of Eastford. That practical old New England town name was eclipsed on my internal map by the wildly optimistic Greek moniker of this village.

All those times I drove through Phoenixville, I passed this building, which I swear, though it stands atop a hill at a major (for Eastford) intersection, I never saw. I guess most people don't really see it, or if they do, they assume it's just another 19th century house that can't decide if its front is its side or its side is its front, and that needs a lot of work. 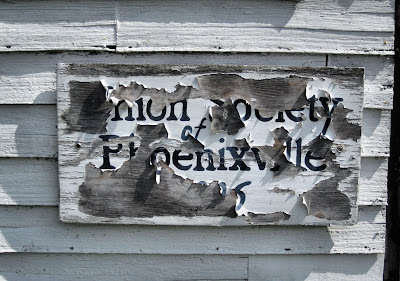 But underneath the peeling paint and behind the boarded windows is (of course) a story. Built around 1806, the house was acquired a century later by the Union Society of Phoenixville, which sought to provide non-denominational Sunday School "and any other unsectarian religious or social endeavor conducive to good morals and the best interests of society."

The Union Society was part of the 19th century Sunday School movement, wherein views on education stemmed partly from a new interpretation of children: "Instead of inherently depraved beings cursed by Original Sin, children were increasingly viewed as little innocents who could benefit from instruction and grow in understanding."

This house may have been used for a similar purpose before the Union Society made it official; it is referred to as the "Sunday School House" in a 1904 inventory of the property of its then owner, Albert Clark.

It was built by the excellently named Smith Snow, on land he purchased from his father, Bilarkey Snow (!) and his neighbor, Zwinglius Bullard (!!) The Snows operated mills: saw, grist, and cotton. Smith Snow sounds like a thrill to be around. He:

"...is remembered in Eastford history as "a decided business man [who] gave but little time to the social conventionalities of life." According to Bayles, Snow changed his clothes the morning of his wedding to Sarah Hyde and simply went back to work in the mill, returning that evening only to eat his supper and then go to bed, as was his habit, thereby consternating the house full of wedding guests."

The house was later known as the "Community House," and it hosted parties, club meetings, and other community events until the 1950s, when Phoenixville's industry and rural lifestyle began to fade. The town of Eastford bought the property in 2002. It is on the National Register of Historic Places, and efforts have been made to preserve it. The roof, for example, was replaced in 2009.

When I walked up the hill to look at the house, it seemed a bit forlorn. There was a sign in front, presumably placed there when the restoration effort began, that said the governor of Connecticut was M. Jodi Rell. (I debated with myself for several minutes whether to walk back to my car for a pen.) It's a cliche to say of a place that time has stood still there. Usually it really means that time has not favored that place, or conversely that a determined group of people have worked very hard to keep time out.

Phoenixville, though, and especially this house, do feel somewhat suspended. But if time can start up again, if a house can come back to life, it has to be possible in Phoenixville, right?
Posted by Johnna Kaplan at 7:15 AM