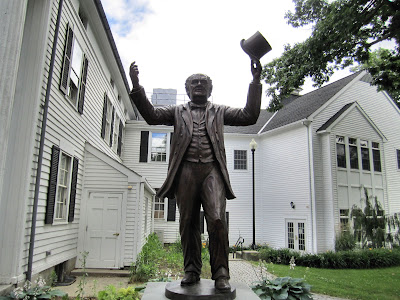 Once, when I was a teenager, I went to see a movie at Bethel's little indy theatre. I don't remember what movie was so important that we had to drive all the way (all the way = 35 minutes) to Bethel, or why a movie would be playing in Bethel but not anywhere in lower Fairfield County. Maybe it wasn't about the movie at all, maybe it was just boredom. Probably it was that.

I do remember Bethel seemed very rural, and everyone there had swivel-y heads. That's not some freaky thing like the Melon Heads, it's just when you go to a place and it's as if you have a sticker on your face that says NOT FROM HERE and everybody's head spins around so they can stare. Did Westport kids really look that different from Bethel kids? I can't imagine we did, but we were marked as "other" somehow, and Bethel's residents looked at us like owls look at at sounds in the trees behind them.

These days, Bethel doesn't seem all that rural, and when I walked down the main street recently no one seemed to care.

Bethel, of course, is the birthplace of P.T. Barnum. He's more associated with Bridgeport today, but Bethel has a small green called P.T. Barnum Square, as well as this statue. A plaque on the base reads:


"I was born and reared in an atmosphere of merriment. My natural bias was developed and strengthened by the associations of my youth; and I feel myself entitled to record the sayings and doings of the wags and eccentricities of Bethel because they partly explain the causes which have made me what I am."

Maybe they stared at us, all those years ago, because they were wags, and one of their eccentricities was to swivel their heads at strangers.
Posted by Johnna Kaplan at 8:00 AM