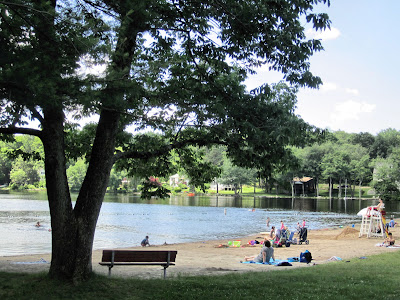 This is Lake Terramuggus in what my phone's map app calls Terramuggus, Marlborough, Hartford, Connecticut. (That sounds so grand, doesn't it?)

I'd never been to Marlborough before, and the only reason I'd ever wanted to go was that it had always looked to me as if the town was shaped like a lopsided cartoon bomb. But that's not really a compelling enough reason to drive through 40 miles of wilderness, so I never got around to it.

But when I found myself close to Marlborough recently, I made a slight detour. The town is technically in Hartford County, but it's wedged between Middlesex, New London, and Tolland Counties, any of which, it seems to me, would be a better fit. Though counties are somewhat of a theoretical concept in Connecticut, they still have personalities of sorts, and Marlborough, aside from being rural, shares a certain randomness with it's non-Hartford-County neighbors. Random is a terribly overused word, and I am as guilty of overusing it as anyone. But anyone who's spent any amount of time in eastern Connecticut's smaller towns knows that sometimes random is the only word that works.

Anyway, Lake Terramuggus. It is named after Terramuggus, son of Chief Sequin of the Wongunk tribe. (Sequin was involved in the Pequot raid on Wethersfield in 1637. They're still sweeping up bits of glitter.)

There is a lot of talk about how much or how little of Connecticut's coastline is public, but to my Gold Coast/Shoreline mind, it seems people here in the Land O' Nutmeg are far more possessive and weird about inland bodies of water. So I was not surprised to find that no one makes it entirely clear who is allowed access to Lake Terramuggus. I think parts of it, at least, are open to the public, where "the public" = "residents of Marlborough."

One end of the lake (with the little beach, above) abuts Blish Memorial Park. I think this park is also restricted to Marlborough residents, though the signs were almost deliberately misleading. It may be that merely the parking lot, or certain sections of it, are restricted. But I parked in it anyway and walked over to the water, thinking that a town of 6, 094 probably didn't have the law enforcement capacity to ticket me within ten minutes of my arrival. And I was correct.

But while I was there a woman literally (yes, really, literally) ran me off a walking path with a stroller, like some twisted suburban cavalry charge. And it wasn't one of those enormous status strollers, either - she just pointed her common little stroller at me and forced me to walk closer and closer to the edge of the path till I was in the grass. Having no baby of my own, and judging my handbag an insufficient defensive weapon, I simply tried to get away from her as quickly as I could.

So yeah. I've been to Marlborough now.
Posted by Johnna Kaplan at 7:40 AM