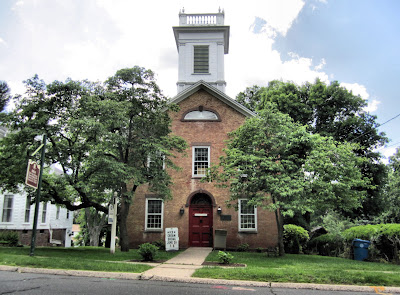 I think I speak for many people when I say I once thought Berlin was synonymous with the Berlin Turnpike, that soulless four-lane strip of sprawl that feeds into the Wilbur Cross. The Berlin Turnpike is boring, except for the occasional glimpses it affords of a past tackiness that's almost old enough now to classify as kitsch. Sometimes people get on it in the wrong direction and wreak havoc. (Sometimes these people are not wearing pants.)

But my assumption about the rest of Berlin was wrong. There is a Berlin that's not the Turnpike. If that seems hard to believe, the next time you end up on the Turnpike, take a slight detour along the parallel Worthington Ridge. This street, the backbone of the Worthington Ridge Historic District, is leafy and residential and quiet. You'll pass an old church with a white spire that towers above its neighbors, an eagle-topped obelisk of a veterans' monument, and house after perfect historic house that will make you think - though you couldn't have imagined it a minute ago on the Turnpike - that Berlin is almost idyllic.

There's this, too: the Berlin Free Library. It began its life in 1831 as the Worthington Academy, and was also used at various points as a church and a courthouse.

I took this picture from across the street, so you can't see this, but the sign in front reads: ICE CREAM SOCIAL. Doesn't knowing that make the building even better?
Posted by Johnna Kaplan at 8:15 AM