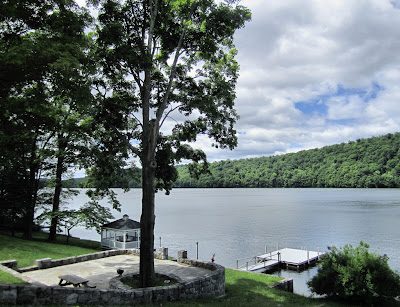 I had a plan for this post. (I don't usually have a plan.) I was going to drive all the way around Candlewood Lake - the largest lake in Connecticut - take pictures of beautiful sights I saw, and not write very much. But what I found ended up being more fascinating than scenic. I mean, it was plenty scenic. But it was one of those cases where pretty pictures alone are not enough. 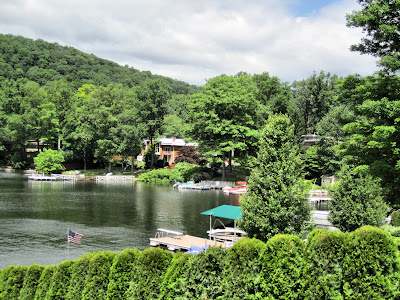 So, first of all, this is someone's backyard. A lot of people who live on the 60 miles of shoreline in one of the five towns that surround Candlewood Lake have backyards like this. I know, nice. But lurking 40 to 80 feet beneath the niceness is something ever so slightly not nice, because this lake was made by flooding forests, farms, and a village, called Jerusalem, in the valley below.

It was done in the name of hydroelectric power, though seeing it today you might guess it was done to increase the grand lists of Danbury, New Fairfield, New Milford, Sherman, and Brookfield. The creation of this 8.5 square mile lake was the first such project on this scale in America, and it worked: today the system of dams, turbines, and pumps not only generates power, but does so while looking like a lake so natural that it's hard to imagine a time when it did not exist. 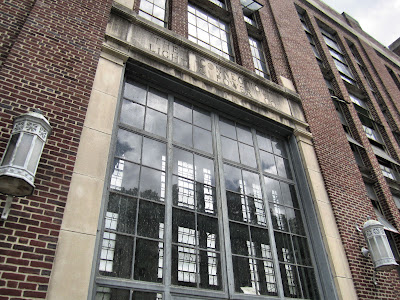 This is the Connecticut Light & Power station in New Milford, where the tiny Rocky River meets the Housatonic. It's a startling building, industrial but sort of grand and gorgeous when you look at it closely. In the 1920s, CL & P had the power of eminent domain. Imagine those feckless executives who go on TV and dodge questions about why your power is still out and why they're doing nothing to fix it, back in the days when they had feck. Scary. 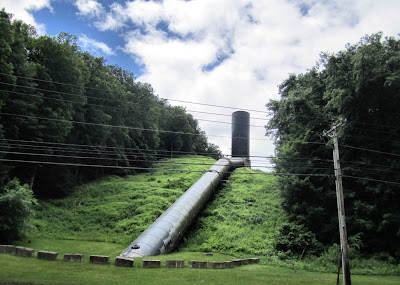 The Housatonic flows behind the station, and in front of it, across Route 7, is this penstock - or as I called it before I looked up the word "penstock," a FREAKING GIANT PIPE. Water is pumped uphill from the river into Candlewood Lake, where it is stored until more electricity is needed. Then it's allowed to flow down the FREAKING GIANT PIPE penstock again, generating more electricity in times of greater demand. If that makes no sense, read this short explanation by the American Society of Civil Engineers, and Steve's more entertaining exploration the history of the Rocky River plant at Connecticut Museum Quest. 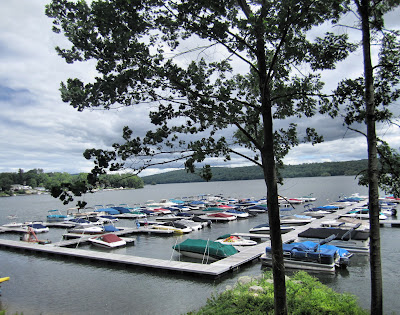 The more I saw of Candlewood Lake, the more conflicted I felt about the whole story. On the one hand, there were those families who had to sell the land they had owned for, in some cases, hundreds of years. (A few of them didn't; some of the bottom of the lake is still privately owned.) On the other hand, the area was sparsely populated at the time, and to say the power plant and the lake helped the local economy would be a ridiculous understatement.

On the other other hand, whole swaths (literally) of history are drowned down there: streets, model T Fords, cemeteries (though the graves were relocated), and schools. On the other other other hand, it's amazing to think of a project like this succeeding in Connecticut today, or ever. Everything it would take to get this done - money, political will, cooperation, endless town meetings - just makes you shake your head and wonder how the people of the past managed to accomplish it. (Like Stonehenge or the Pyramids.) But they did it, and quickly - an idea in the spring of 1926 became a completed reality in the fall of 1928. And progress (and businesses with "Candlewood" in their names) came to this quiet valley. And for all that, it's still pretty darn quiet.

When you add it up the balance seems to tip almost entirely to the positive side, but on whatever hand I'm up to now, there's still something disturbing about it. And something amazing, too. 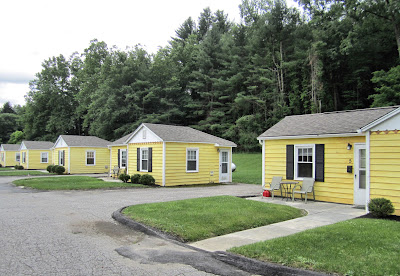 A good part of the area around the lake is simultaneously just what you'd expect and not what it seems. These cottages, for example, are not on the lakefront, and they're not vacation homes. They're basically just extended-stay hotel rooms on Route 7. And yet...adorable. 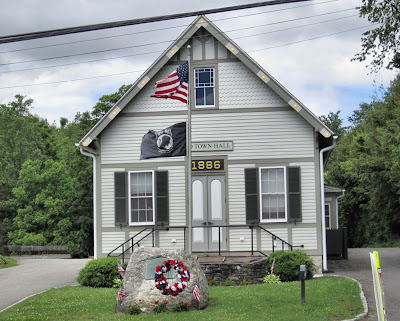 The breakout star of my circumnavigation of Candlewood Lake was Sherman, the triangular tip of northern Fairfield County. Sherman has a population of less than 4,000 people in over 23 square miles. No one really ever talks about Sherman, no one brags of living here or writes of how appealing it is. Of course, if they did, more people might come, and that would ruin the appeal. 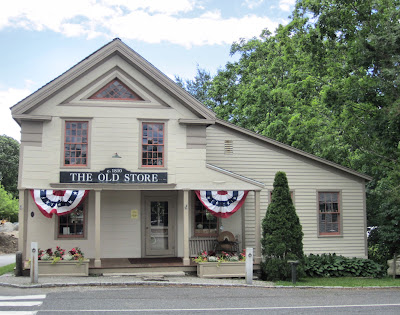 So I won't say too much about it, except it's the sort of town where you want to photograph all the buildings, not just the c. 1810 store and the Old Town Hall, but the library and all the houses too. 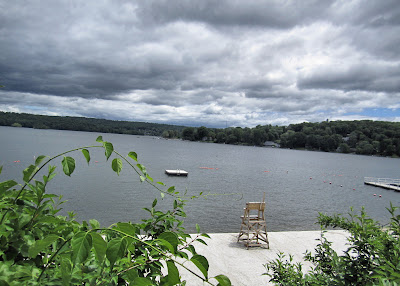 You can't drive along the entire shore of Candlewood Lake; little dead end roads and private land make that impossible. But you can make a general circle around its Rorschach-blob outline, and see the water glittering enticingly outside your window for long stretches at a time. And you can drive almost through the lake at one spot, or at least feel as if you are, thanks to a little causeway where the lake meets Squantz Pond. (Squantz was a chief of the Schaghticoke tribe, not some random German.) 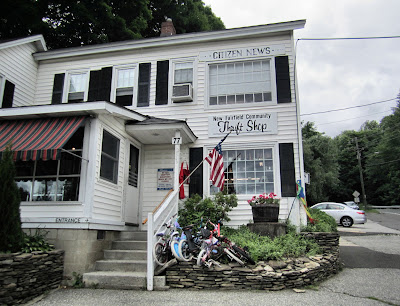 You can dive in Candlewood Lake too, and see the lost world preserved at the bottom. But if you're not going to do that - and I know I'm not - a quick drive around will give you a surprisingly powerful sense of what's been created here, and perhaps also of what is gone.
Posted by Johnna Kaplan at 10:30 AM