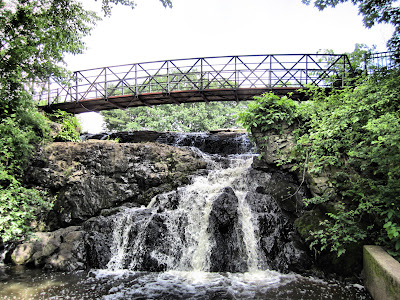 I was watching CT-N one day, as you do (oh, you don't?) and in between programs, where there is usually that creepy shot of the back of a woman's head or that sped-up footage of cars on a highway along with rotating names of some (but frustratingly not all) of Connecticut's towns, there was a very pretty image of a park. The park's name, Mill Pond, was visible on a sign. I looked it up, wondering where it was (every town has a mill pond, doesn't it?) and found it was in Newington.

But more importantly I discovered that in Newington, in this very park, there is...no, wait...it's worth the ellipses...THE NATION'S SMALLEST NATURAL WATERFALL.

I am not usually one to collect visits to the smallest this or the biggest that, or to get caught up in trying to find the first or the best. Occasionally I am compelled to, but usually the thought of it just makes me tired, and I'm happy to leave superlatives to the millions of people who do it far better than I could.

But this was different. How, I wondered, do you even know your waterfall is the smallest? Might not some other town somewhere have a smaller waterfall, and just not mention it? Or what about in big rugged states, like Idaho or Maine, where a mini-waterfall could lurk within some enormous swath of state park or BLM land for eons before anyone saw it, let alone thought to measure it? How do you even measure a waterfall? How did I not know this was here?

I don't think the residents of Newington care about such things. They are just happy to have this waterfall; they built it an observation deck, drew it on their town seal, and hold an annual festival in its honor. It's 16 feet high, if you're wondering; it doesn't look all that small, to be honest. Daredevils aren't lining up to walk across it on wires or anything, but still. If I hadn't known what it was I would not have thought it especially diminutive.

But it's very pretty. And as I was walking over to it from the parking lot, I had one of those brief little moments where you say to yourself (if you don't, you should), "Huh. Connecticut. It's really nice here."

(About the title of this post, I couldn't resist using it, but until now I had no idea how awful the lyrics to that song were. There was a time when you couldn't escape it, yet I never really listened to the words. Even if you think you know them, look them up - I swear, they're even more terrible than you remember.)
Posted by Johnna Kaplan at 7:35 AM