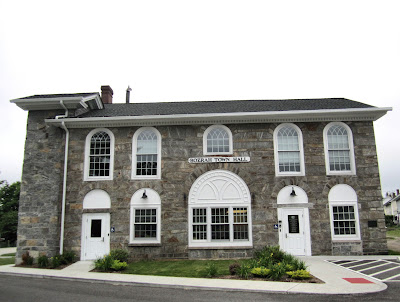 Ah, Bozrah. Along with Lebanon, it stands out as a little Semitic island in a sea of English and Indian names. It almost makes me feel like I belong here in New London County.

And there is an awesome story about how it got its name. Now, this story may not be true. But it's been told long enough that it's become history in itself.

They say that in 1786, residents of what was then a section of Norwich called New Concord decided to incorporate as a separate town. They wanted this new town to be called Bath, after Bath, England.* So they sent a representative to Hartford to make this request to the General Assembly. The man they sent was dressed so oddly that when the legislators got a look at him they all fell about laughing and one of them quoted the Book of Isiah: "Who is this that cometh from Edom, with dyed garments from Bozrah?" That struck the Assembly as so hilarious, they propmtly made Bozrah the new town's name. (Why not Edom? I don't know. Ask the legislators of 1786.)

It behooves anyone who repeats this story to point out that there are other Biblical references to Bozrah, so it can't be ruled out that the funny story is apocryphal, and the name is just a reference to either a divine curse or sheep.

I like the story either way, though, because it lines up nicely with another (probably not true) tale of another badly-dressed Connecticutian. There is a theory about Yankee Doodle (the official State Song, don't you know) which holds that British officers wrote the lyrics to lampoon the sartorially-challenged Colonel Thomas Fitch, son of Connecticut Governor Thomas Fitch, during the French and Indian War.

And the center of Bozrah, where the Town Hall building is, is a village called Fitchville. I don't know if that Fitchville is named for the Fitch family, but the Fitchville located in Ohio's Firelands, in the former Connecticut Western Reserve, is indeed named after the governor. Who came from Norwalk, and whose house-slash-office can be seen at Norwalk's Mill Hill.


*So after all that Connecticut history, I will tell my own (not particularly funny, but entirely true) story about Bath. When I was about 15, I was on a school trip to England and my friend and I were sitting on a bench in Bath, eavesdropping on a couple having a fight. At one point the woman turned to the man and said loudly, with a combination of anger and despair and an accent like Eliza Doolittle pre-speech lessons, "Oooooh, youuuuu!" And to this day I cannot think of Bath without saying to myself, in my head, "Oooooh, youuuuu!" I suppose I should also say it when I go to Bozrah.
Posted by Johnna Kaplan at 7:30 AM