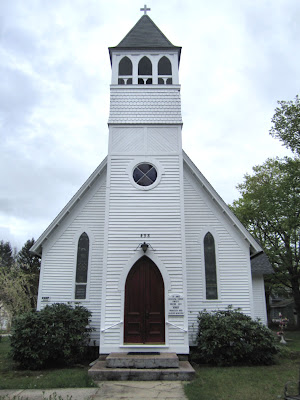 Not long after I moved back to Connecticut, I heard about a rural synagogue in Lisbon. I wrote about it here. Some time after that, I began to notice that it had little near-doppelgangers in churches all around the state. The church above, St. James Episcopal, is in Haddam. It dates from over 60 years before the synagogue, so obviously this style - which I'm starting to think came from some kind of Make Your Own House Of Worship Kit - remained popular (or at least convenient to build) for some time. 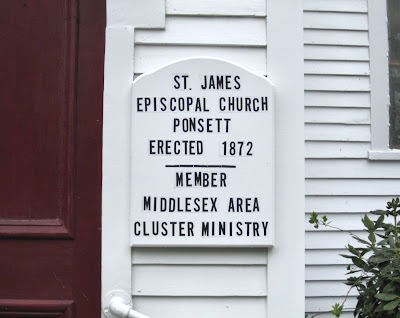 I took this picture so I'd remember the date, and then I looked at it when I got home and said to myself, What the heck is Ponsett? And the answer is, unsurprisingly: it's a section of Haddam. (So are Higganum, Haddam Neck, Hidden Lake, Tylerville, and Shailorville. Which does nothing to dispel my belief that all towns with Haddam in their name are slightly otherworldly and possibly inhabited by faeries, or gnomes.) In Haddam there's an Old Ponsett Road, and a Ponsett Brook, an Old Ponsett Cemetery, and a New Ponsett Cemetery. The founder of this church, Rev. William Clark Knowles, wrote a book called By Gone Days in Ponsett-Haddam. It was published in 1914, so quite a few days have gone by in Ponsett since. The book has chapters titled "A Galaxy of Old Folks" and "The Roll of Clericals" and "Ponsett in the Wars." You can read it, it's sort of awesome.

I also wondered what a cluster ministry was, because I can't think of anything good that starts with "cluster." One definition I found was "a localized gathering of church and ministry leaders sharing a common vision, strategy, resources and system for developing leadership, planting new churches and ministries as well as adding to the health and vitality of existing churches." Oh. Sounds nicer than bombs and headaches and...things.
Posted by Johnna Kaplan at 8:30 AM