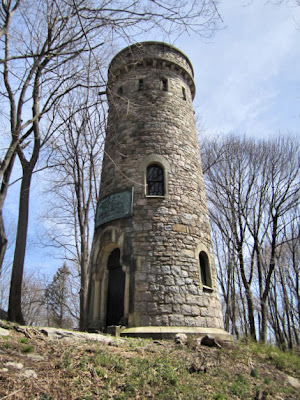 It's getting so that finding random stone towers in Connecticut isn't even startling, it's just, oh yeah, another tower. This one is in Guilford.

I sent this picture to my mom and she wrote back, "Rapunzel could live there!" So then I had Agony stuck in my head for hours. I don't love all of Into the Woods, but Agony is fantastic and Agony Reprise might be better.

I would never have known this existed if Ryan Hanrahan, the NBC Connecticut meteorologist and reporter who also blogs about weather here, hadn't mentioned it on Twitter. It's not the sort of landmark you'd normally encounter on your own if you don't live in Guilford, because it's located literally in someone's backyard. I felt bad driving up to it, on their driveway, and walking up closer, on their lawn. I didn't try to read the plaque because it would have required me to climb up their children's playscape.

But I know it was originally a water tower and it used to look like this. Built in the mid-19th century to supply water for the fountain on Simeon Chittendon's "imposing summer estate with landscaped grounds, a fountain, and a deer park later given over to peacocks," it was used "during World War II and in 1955...as an aircraft warning Station, manned day and night by volunteers." (There's more here; it's fascinating.)

And as I was driving to the tower, I noticed a house with a cellar so remarkable it had its own plaque. This turned out to be the Regicide Cellar, where "In June 1661, William Leete, then Governor of New Haven Colony concealed for three days Whalley and Goffe, two of the judges who signed the death warrant of Charles I of England."

Someday, I'm going to have to write a post on how much of early Connecticut history involves hiding people in things. Once I get through all the towers...
Posted by Johnna Kaplan at 8:30 AM