A Minute In Gales Ferry 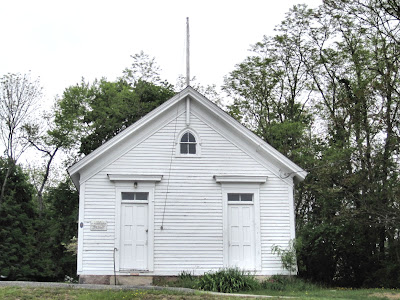 It might come as a surprise to those who read this blog frequently that I don't in fact stop for every little old schoolhouse I see. Many of the ones I've posted here have been accidental finds, and a few I've sought out because they had something unique about them. But after a while, you see so many of them, and they all begin to look alike. (Because mostly they are alike.) So I sometimes drive past one and think to myself, Eh, a schoolhouse. Should I stop? No, too lazy. (I typed "lazy" as "laxy" just then, which I rather like. Lax + lazy, it's like extra, super unmotivated. Or, alternately, being lazy in L.A., at the airport.)

I only stopped for this schoolhouse because the village of Gales Ferry, or the town of Ledyard, or some organization or other, actually put up a sign on busy, sprawl-y Route 12 that says something like "Historic Schoolhouse!" with an arrow. Since they went to the effort, I felt like I had to turn. And I'm glad I did because this schoolhouse, though not particularly original as schoolhouses go, is nevertheless very sweet. There's been a schoolhouse in this location since 1750, but this particular one was used between 1868 and 1929.

Incidentally (or not?) it's on Hurlbutt Road. There is also a Hurlbutt Street School in Wilton. I've seen other places named for Hurlbutts scattered around the state too, and Hurlbutts pop up frequently in old Connecticut records and genealogies. During the Revolutionary War one Gideon Hurlbutt was captured by Tories in Westport, and managed to escape by means of a frankly not at all cunning plan.

And on another note, sometimes I'm so glad I don't have kids, because if I did they probably would have been with me in Gales Ferry and then I would have had to listen to them yelling "HURL-BUTT!!" at the top of their lungs for the rest of the day.
Posted by Johnna Kaplan at 8:30 AM