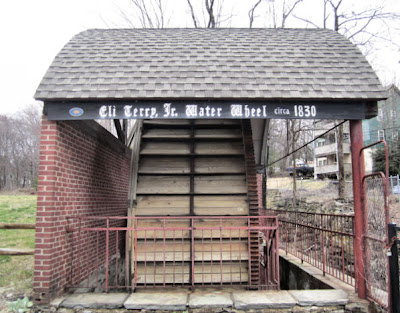 If I ranked all of Connecticut's 169 towns according to where they fall on my personal radar, Plymouth would be pretty far down. I'm not even sure when I first realized we had a Plymouth, but it was probably fairly recently. People just don't talk about Plymouth much, at least not to me.

So it was curious that within the space of two days I:

1) found out Plymouth had something I wanted to see
2) realized I could be in Plymouth on the way to somewhere else I was going
3) decided to go to Plymouth, and
4) read an actual article all about Plymouth by Peter Marteka - who knows about every fascinating place in Connecticut that you never dreamed existed - in the Hartford Courant.

Luckily for me, Peter covered so many other Plymouth attractions that he didn't get to what I was after: this water wheel. 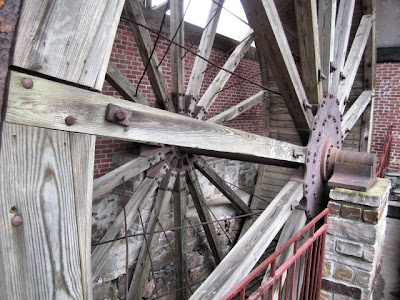 The story of this thing seems pretty simple at first glance. It's a large (over 20 feet in diameter if this real estate agent is to be believed) wooden wheel. 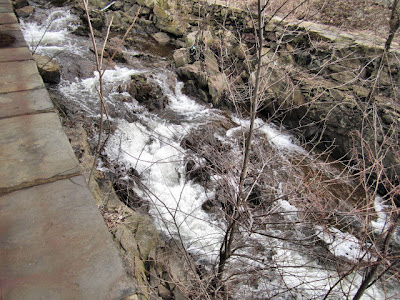 It is still now, but you can imagine how it once turned, harnessing the power of the Pequabuck River that rushes beside it. And unlike some scraps of Connecticut history, its name and date are printed right there on its protective brick shelter. 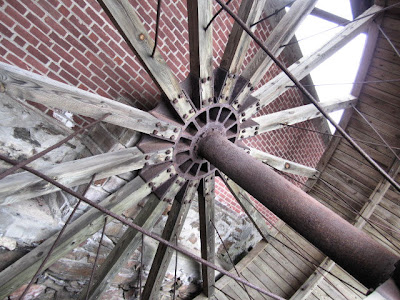 But of course it's not that easy. The Eli Terry Jr. Water Wheel, circa 1830, may have been built at a later date, and not by Eli Terry Jr. 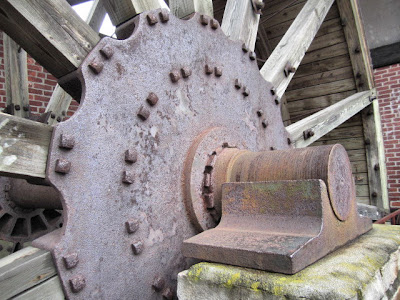 Not that Terry wasn't a big deal around here - this is the Terryville section of Plymouth, after all. But this wheel - supposedly "the only existing manufacturing water wheel in the U.S. with original gear" - may have been constructed in the 1850s, when the Lewis Lock Company owned the land. The National Register of Historic Places and the CT Trust For Historic Preservation, are more careful with their naming and dating, and more precise with their descriptions. 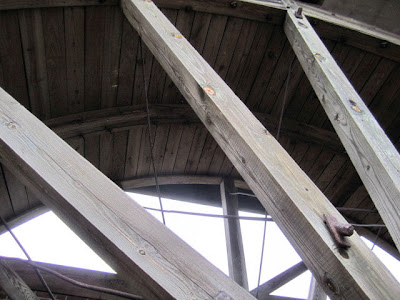 Whatever the exact details, it's somewhat jarring to see this piece of Connecticut history just hanging out on the side of a busy modern road. 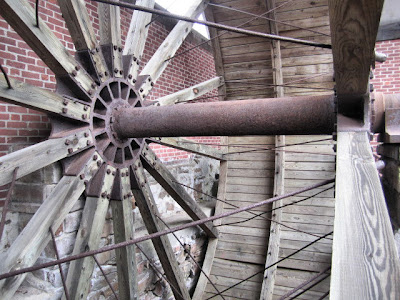 And here's a clip from three years ago of Senator Chris Murphy (then Representative Chris Murphy) listening as a local politician talks about the water wheel. In case that's what your day was missing.
Posted by Johnna Kaplan at 9:20 AM