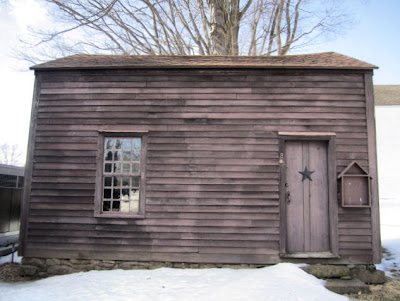 There are many buildings worth stopping to stare at in Durham's Main Street Historic District. But I inexplicably honed in on this one. Located between the Town Hall and the Historical Society, I thought at first that it might be some sort of shabby chic storage shed. (Five times fast, try it.) But it's not; it's a Sabbath Day House.

A what now? Here's the dictionary definition:


A house formerly built (as in colonial Connecticut) near a church and heated on winter Sundays as a place for worshipers living at a distance to warm themselves and eat between morning and afternoon services in an unheated church.

This one was built around 1780, and was rescued from a planned burning (!) in the 1960s. There were other Sabbath Day Houses, built around the Durham Green starting in the 1720s, by town vote. This is the only one left.

You wouldn't know it from this blog, but some of my favorite eras of history date to long before the advent of Connecticut. When I read about them, I often think that a) people are people, and always have been, but b) people in other times and places are capable of coming up with things so seemingly bizarre that we can't fully comprehend them, so we shouldn't be so arrogant as to believe we can. A Sabbath Day House is not bizarre, of course, it's perfectly logical. But I love this little building because it's a reminder of how those early New Englanders' lives were like ours (who wants to be cold?) and yet, at the same time, very much not.

Oh, and Durham also has what might be the best town seal in Connecticut. Cow!
Posted by Johnna Kaplan at 8:55 AM