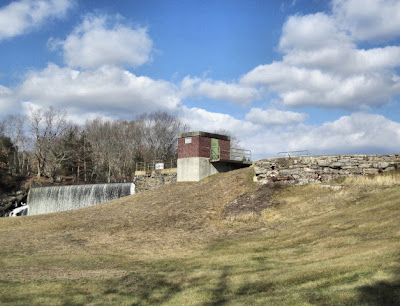 Recently I wrote about Isaac Glasko, the man who gave the village of Glasgo in Griswold its name. I had intended to go to Glasko's burial place, the old Kinne Cemetery, located beyond the dam where Glasgo Pond flows into Pachaug Pond.

But at the time the ground was sodden and I didn't want to go slogging across it in my sneakers, so I waited until everything had dried out a bit and all I had to contend with was snow and sub-freezing temperatures. 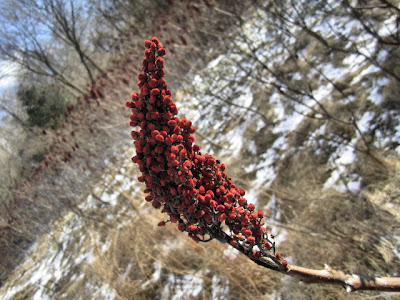 I started up the hill past small, leafless trees and clusters of staghorn sumac. The snow lay in bunches atop long, bent grass, like something from a beach that had become drastically lost. 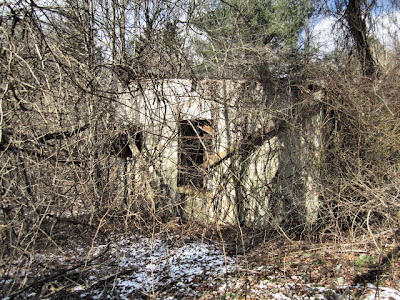 I encountered a dilapidated building with missing doors and rusted windows frames whose panes seemed long-gone. I ducked beneath a fallen tree and scrambled through what appeared to be some harmless branches, which left my hands bleeding and my hair full of little twigs with multiple points, like jacks. Inside this feral structure, the roof was partially open to the sky and vines had tumbled through. 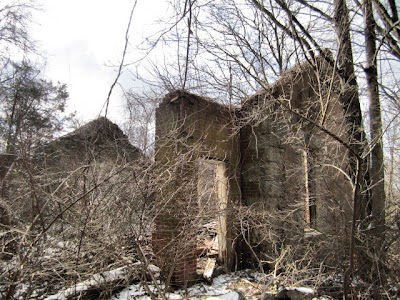 And then, after passing a few mysterious cement foundations, I came upon a ghost of a mill. It seemed almost to be breathing, as if I had surprised it. 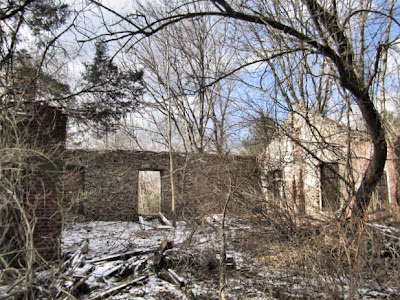 Compared to the other abandoned man-made things below, it looked less like an idea gone wrong or a place to drink beer than a remnant of a lost civilization. Which I suppose it was. 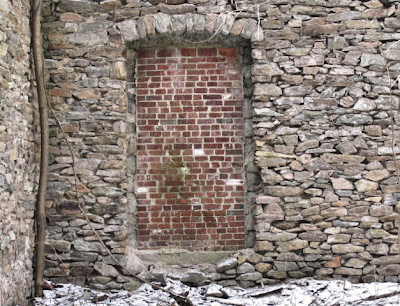 But it looked sturdier than they did. It looked like it would be here, gracefully crumbling, long after they were gone. 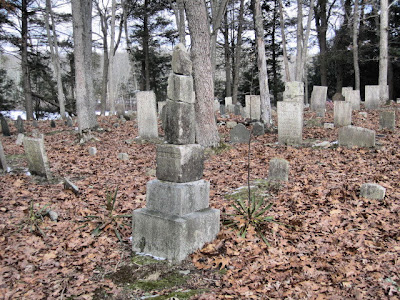 Finally I reached the cemetery, marked by stone steps that formed a little entryway and a sign, knocked over by the wind and laying on the dried leaves, which read: TOWN OF GRISWOLD HISTORIC CEMETERY - CIRCA 1710 - ADOPTED BY GENERAL EBENEZER HUNTINGTON SOCIETY CHILDREN OF THE AMERICAN REVOLUTION - THE OLD KINNE BURIAL GROUND.

The space was the size of a small backyard, enclosed by a low stone wall. It stood high above an expanse of what could have been snow-covered ground or frozen water. I could see it, white and icy, beyond numerous trees. 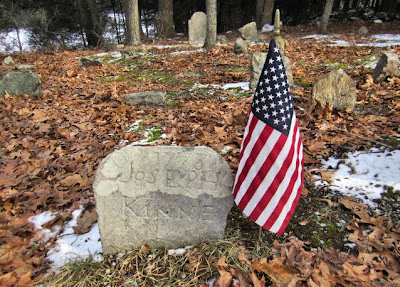 I did not search for the Glasko graves (it was freezing; I was bleeding) but I found some Kinnes. Joseph, on whose tomb I could read only one date, 1778. 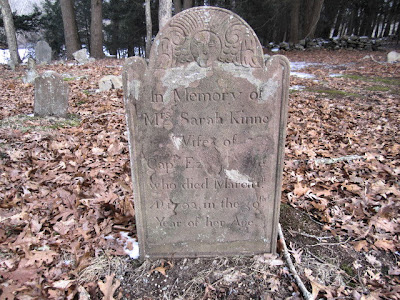 And Sarah, who was the wife of a captain whose name had chipped away. She died in March of 1792 "in the 59th year of her age." I knelt to look at the soul effigy, covering my knees in ice. 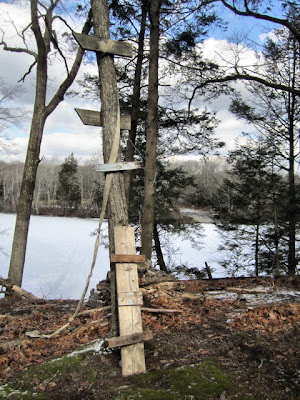 People do come up here, I assume fairly often. A few scattered cans and wrappers, along with the little flags in the graveyard, attested to their recent presence. Still, this is one of those places that hangs onto its past stubbornly, as if whoever buried Isaac Glasko walked away down those stone steps and no one had been here since.


One other thing: I don't normally give directions, but this is a site that's really worth going to and also somewhat hard to find. Its address is listed all over the Internet as 1 Jarvis Road, but if any normal person (as opposed to people like me, who get so obsessed with weird places in rural Connecticut that we're willing injure ourselves to explore them) turned up Jarvis Road they would be confused and discouraged. Instead, park on Route 201 in front of the dam. Facing the waterfall, walk to your right and there will be a barely discernible path roughly parallel to the fence. This goes up the hill and eventually turns left to reach the cemetery. (If you don't want to park on the shoulder, you could also park in the lot at Buttonwood Farm, which is not far from here. Then, if it wasn't the dead of winter, you could get ice cream.)

Oh wait, one other other thing. The Kinne Cemetery is a stop on the Connecticut Freedom Trail. I haven't been to that many of the trail's sites so far, but every one I have seen is surprisingly cool. When I first heard about the Freedom Trail years ago I thought it might end up being underwhelming; a lot of the stops sounded too small or low-key to convey such a momentous story. In fact, that's precisely what makes them cool.