And Things That Go Bump In The Night 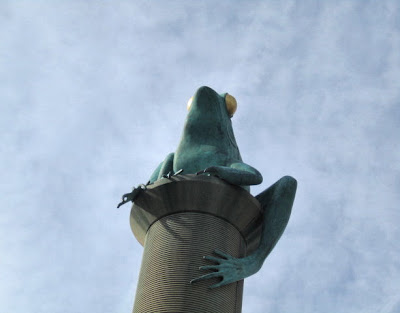 In the darkness of late Wednesday night slash early Thursday morning, the wind blew so loud that I thought all of Connecticut must have woken up around midnight and again at maybe 3:15 and then at 4:00 just like I did, waiting for the crunch of something falling, something being destroyed. For me, thankfully, the damage brought by this storm was not like last time. It consisted only of part of a day without power, and that brief night of fear.

Which was nothing like the terror experienced one night in the summer of 1754 by the residents of the small village of Windham. (This is a well-known story, but sometimes those are so good they're worth telling again.)

1754 was a scary moment in Connecticut. There was so much to be afraid of: the French, the Indians, the complete lack of Dunkin Donuts. So when the people of Windham heard an otherworldly shrieking noise in the darkness that seemed to come from all directions, they naturally assumed that either they were under attack or the Day of Judgement had arrived. Women and children screamed, and rumors flew. Grabbing whatever weapons they could find, the men of Windham (some of them totally nekkid-ass nekkid) ran outside and hastily assembled to fight...nothing.

When the sun came up, and everyone had trudged home relieved and ashamed, the source of the terrifying clamor was discovered. A whole mess of frogs, victims of illness or low water levels or some sort of amphibian turf war, lay dead around a nearby pond. It was the ultimate 18th century facepalm moment.

But the people of Windham owned it, mostly. (They had little choice, as everyone in all the surrounding towns now laughed at them constantly.) Bank notes depicting the "battle of the frogs" were printed. A poem was written. There was an operetta. And thirteen years ago, when a bridge had to be built over the Willimantic River, what design could have been chosen other than one incorporating four 11-foot frogs?

Oh yeah, they're sitting on spools of thread. Because Willimantic is Thread City.
Posted by Johnna Kaplan at 9:30 AM