Once You Had Gold 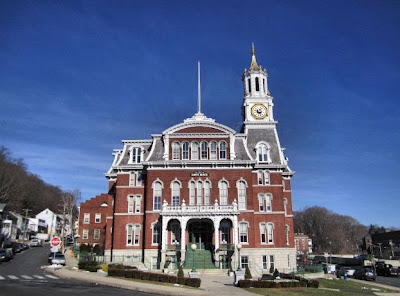 I've spent too much (yet not nearly enough) time in the lonelier stretches of America's heartland, parts of Ohio and Indiana and Missouri that could absorb multiple Connecticuts and probably not notice, places you can only traverse on little seldom-used highways that go on all afternoon. The towns scattered across this land don't need outside attention, and don't expect it. When they get it, they look at it askance. But there was a time when these little map-dots thought they were the center of the world. At least, that's all you can assume from their municipal buildings.

And for a long time, I associated gold-plated grandeur in the semi-wilderness with towns like this, with the far places out there in Central Time. But then at some point I encountered Norwich City Hall.

This, you realize the minute you set eyes on it, quite probably while attempting to get back to some turn you missed off a one-way street in a confused, ancient-feeling and empty grid, is a building from a time when they knew how to build buildings. 1873, to be exact. The clock tower came later. And, something I was surprised to learned from Historic Buildings of Connecticut, the "European plaza" was built at the late date of 1999. So maybe there's some hope of being the center of the world still.
Posted by Johnna Kaplan at 10:30 AM