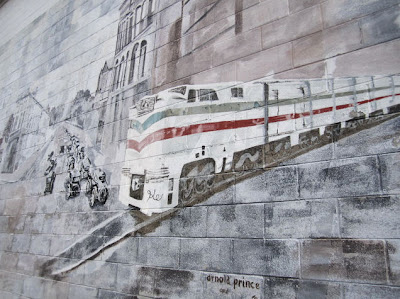 Something I've learned about Connecticut in the past few years: you literally can't turn around without seeing something that makes you go hmmm. Which nine times out of ten then turns out to be something far deeper than that, with a whole story, a cast of characters, and a background that you have to read up on if you want to understand. This is both a blessing and a curse.

I carelessly drove the wrong direction down Main Street in Willimantic the other day, and had to circle around the block to re-direct myself. The block I chose just happened to have a wall (belonging to a lumber store) that was covered with murals. There were maybe ten of them, all very detailed, each depicting a different Willimantic scene.

Being from New London, when I saw the murals I wondered, "Hmmm, arts grant or random community project?" As it happens, the answer is "neither."

Arnold Prince, the sculptor (!) who began the murals in 1996, was commissioned by the building's owner. He painted the upper portions of the scenes (the wall is 18 feet high) by standing on a ladder. The people in the pictures are real people, passers-by who asked if they could jump, a la Mary Poppins, into Prince's work.

This one here, with the train, caught my attention. I don't know why. Maybe because I'd passed a freight train rolling slowly along the tracks a few minutes before. Reading about Willimantic and trains, I found a story I didn't know, a very sad and (it seemed to me) very Connecticut story. It can be told in two headlines: Amtrak Returns To Willimantic and Amtrak's Decision To Derail Montrealer Service A Blow To Willimantic.

At one time I would have seen the murals, maybe taken the picture, and thought simply "Hey, cool." Now I know better. All this complexity around every corner reassures me that deciding to live in Connecticut was really not crazy, and it might even have been smart, because this place will grow on you by the day if you let it. But it's also tiring. Because sometimes I want to just look at the pretty painting and be done with it, and I can't.

But I can say, if you get lost in Willimantic, turn around on Walnut Street.
Posted by Johnna Kaplan at 7:45 AM