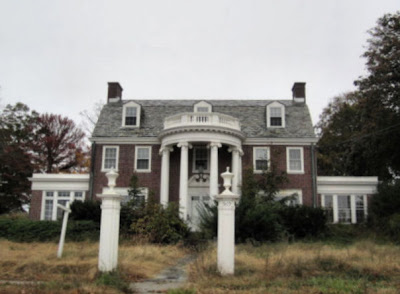 This Georgian Revival house used to be for sale, I mean properly, obviously for sale, with a realtor's sign out front and some semblance of upkeep. That was a few years ago. I don't know when the sign went, or when the grass began to be left to grow wild and the bushes to creep upwards, threatening to eat the first story windows. According to the internet, it is still for sale. It's expensive. (Is there an "understatement" emoticon?)

It was built in the 1920's by Ernest E. Rogers, founder of the Winthrop Trust Company*, New London Mayor, State Representative, State Senator, State Treasurer, and Lt. Governor of Connecticut. (He ran for Governor but lost to Wilbur Cross, so there's no highway named after him, and his summer home is slowly going feral.)

If you live in New London you probably know where this house is. (Hint: Facing the water.) If you don't, I almost don't want to tell you, because then you might swoop in and rescue it and deprive me of the chance.

Not that I could afford it, unless they've suddenly (and secretly) made it into one of those deals where you buy the house for $1. Not that I even want a house, of all things. Not that this house, with its with ridiculous gate-posts but no gate, its pompous pillars, and its little Antebellum-ish balcony, is anything like the kind of house I'd normally look twice at. (That would be something like this. Or this. Or this.)

But I'm a sucker for a Connecticut River Valley Doorway. And for double chimneys. And for anything that's kind of a mess, but with work, could be made extraordinary.

*Banks. They ain't what they used to be.

Posted by Johnna Kaplan at 7:12 AM