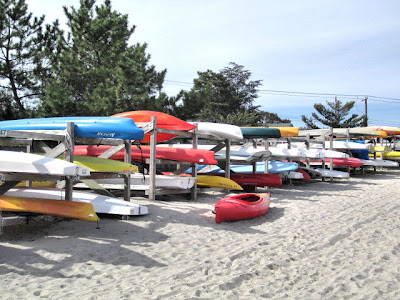 This is Fairfield's Penfield Beach. You can see the Penfield Reef Lighthouse and the Fayerweather Island Lighthouse from here. I would probably have forgotten that this beach existed were it not for Matthew of the addictive blog Soundbounder, who, I think, knows about every beach and every town along the Sound. And more importantly, where the Long Island towns are in relation to the Connecticut towns. Which most people do not know. (Most people = me.)

I've driven up to this beach many times, during the periods of teenage boredom I wrote about a bit here. We never went past the guard house, though, because bored is one thing, but so bored you'll pay to enter a beach one town over instead of going to one of the beaches you can enter free in your own town, well, that was a level of bored we hadn't experienced yet.

Not that I'm in the business of reviewing beaches (or anything else), but as beaches go, this one was resoundingly not special. But in flailing around for something to say about it, I came across this hilarious description of another beach, Sasco Beach, on the Fairfield Parks and Recreation website:


Located in one of the wealthiest areas of Fairfield just to the south of Southport Harbor and the Country Club of Fairfield on Long Island Sound,  this 9.9 acre property is a somewhat secluded beach compared to the other Town beaches and may be accessed by Residents only.

Huh? Is it really socially acceptable for towns to define their sections primarily by income level, rather than, I don't know, "one of the prettiest areas" or "one of the first areas to be settled by Europeans" or "one of the quietest areas" or...I could go on. And on a site that's not about real estate or demographics or employment, but where to find parks? This, Connecticut, this is why people don't move here.

Posted by Johnna Kaplan at 9:00 AM