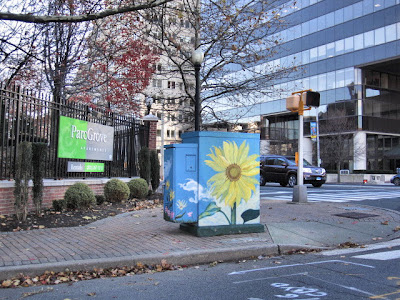 It's already been established that I like sunflowers, whether filling a country field or edging a parking lot in town. But I have to stay true to my roots and say there's something special about the urban version.

Many of Stamford's traffic signal boxes are painted, each differently - some are fantastical, some are traditionally pretty, others are humorous or edgy or simply weird. Other Connecticut cities have jumped on this band-wagon, but I think Stamford was first. The New York Times was on the story in 2006, and claims the painting began in 2003, which means it had probably been going on for ages by then.

I had to resist the impulse to start a project of finding and photographing and cataloging every one of these. That's why there's only one pictured here, and not five or ten, which would have been easy enough, but I knew if I got two I'd be hating myself for not getting 100. That makes complete sense, right? Yes. Of course it does.

Posted by Johnna Kaplan at 8:25 AM