"At New London US 1 crosses the Thames River on a steel bridge that is sufficiently high to afford a view straight down New London harbor, one of the deepest on the Atlantic coast with more than three miles of navigable water frequented by seagoing vessels of many types."

So says the FWP guidebook for Connecticut, published in 1938. This is still true, except that the bridge is now the Gold Star Memorial Bridge, the twin pale blue spans that swoop high over New London, carrying I-95 as well as Route 1 over the river. My practice on bridges is usually to stare straight ahead and attempt to delude myself into believing there's no water below, so I didn't confirm the brilliance of the view.

On the other side, in Groton, the Guide goes into a tizzy over US 1 and US 1A and US 1 Alt, but in front of me plain old Route 1 just kept going, all by itself. I reached the Site of the 'Hive of the Averys' where a "dignified shaft" - in reality a somewhat ridiculous-looking bust atop a high pillar, like a decapitated Pilgrim on a pike - marked the location of the former Avery homestead (think Avery Point) home of generations of Groton notables.

I passed the "hamlet" of Poquonock Bridge, with its Baptist Church and fire station, the basis of many communities, it seems, as if all there is in life is to pray things don't catch fire and put them out when they do.

I came to West Mystic, which sounded suddenly like a fantastical location along the lines of West Xylophone. Drop the "West" and for some reason the make-believe aspect goes away too, and it's just old familiar Mystic. Which, the Guide informs me, the British during the Revolution called "a cursed little hornet's nest." If I were in charge I'd put that on all the village's welcome signs. I'd sell "cursed little hornet's nest" tote bags. 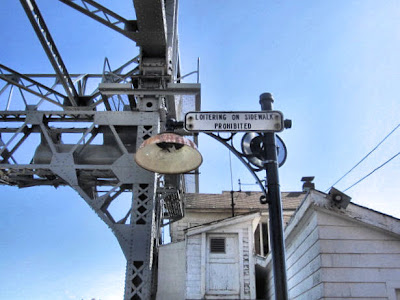 I've noted before that there's a conspicuous lack of Mystic on this blog, being both such a famous destination and so close to where I live. I'm waiting till it's colder to go back, when I can walk around taking pictures more freely and no one will care if I loiter on the sidewalk because all the tourists will be gone. 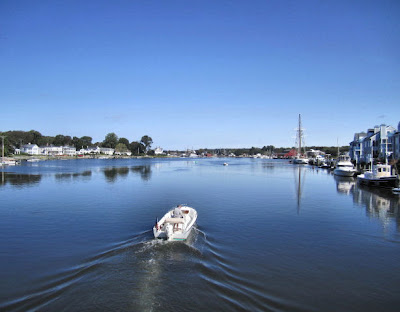 Well, all the tourists except me, I suppose. 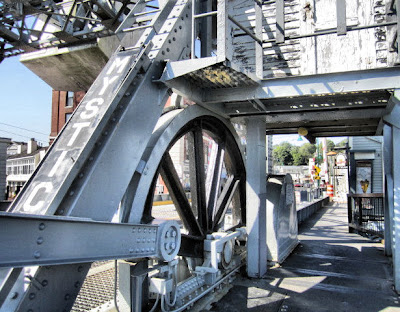 East of the Mystic bascule bridge, almost too playful for a functioning piece of infrastructure, I eventually came to Mason's Island Road. Mason's Island was "presented to Captain John Mason of Windsor in appreciation of his victory over the Pequots." The statue of Mason that once stood near here has been removed to parts north, but eponymous his road and island ("sightseers are not welcome") remain.

Quiambog Cove, where there was supposed to be "an excellent view of Fisher's Island,"was as pretty as it must have been 70 years ago, and though the tour did not go through Stonington Borough, its description of the place - a "quiet old whaling port...on a peninsula, undisturbed by the rush of traffic" held up just fine.

Nearing the end of my drive I reached Wequetequock, one of my favoritely named Connecticut villages (two Q's! it's almost the Albuquerque of New England!) Wequetequock is so small that if you're not paying attention you can miss the fire station and the little lamp-post shaped sign and never know it's there.

You have to pay attention in Pawcatuck too, and make an effort to stop there, or else you'll get unwittingly whisked across the Pawcatuck river into Rhode Island. 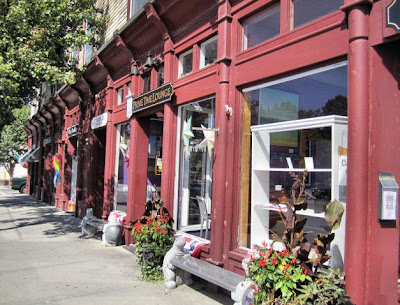 But if you do stop, if you park as soon as you see the small downtown ahead, you might be pleasantly surprised, as I was the first time I came here. 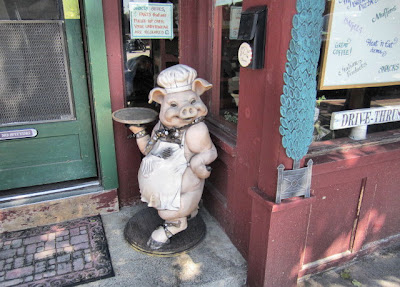 On this day Pawcatuck was all red brick and red paint, a strong red that made the village look more solid and less an appendage of Westerly then it had before. 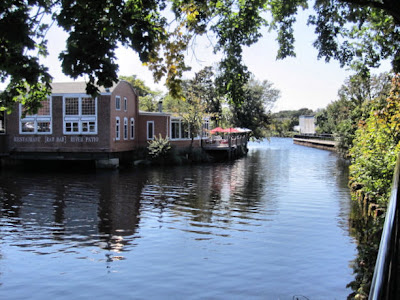 I could see Rhode Island just across the river, and that was the end of Tour 1. It was, also, however, the beginning of Tour 1J. But it will be a while before I get to that.

Posted by Johnna Kaplan at 7:53 AM