Oldest and Smallest and Stratford Again 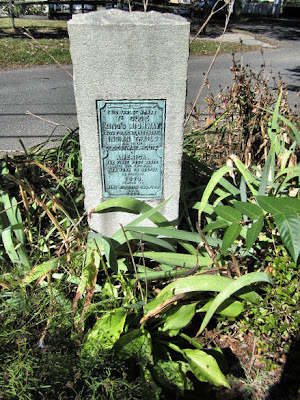 I never thought I'd write more than one blog post about Stratford, but it's proving to be a continual font of surprises. For example, did anyone know that in Stratford there's a marker commemorating the oldest postal route in America? I'm not usually one to go looking for -ests, but I was right there, so I figured I might as well.

The DAR put up the marker in 1915, on the spot where (supposedly) a post rider on the first mail run, in 1673, paused between New York and Boston. There's nothing really unique about Stratford in postal history, as far as I can tell, except that they chose to commemorate this and other towns on the Post Road didn't. So OK, that's not the most exciting thing.

But wait! Because the stone is planted in the ground of... 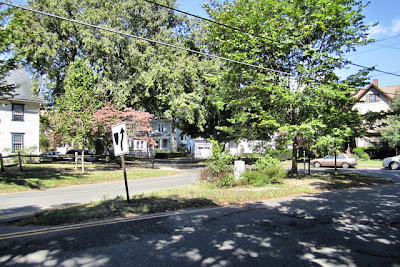 ...what Stratford claims is "Connecticut's smallest park." Connecticut's smallest park would naturally be quite small, but I think maybe not this small. This is, frankly, a traffic island on a road without traffic. Maybe there's a fine line between traffic island and park, but this doesn't quite come close enough in my opinion. It might get a very slight nudge toward the park end of the spectrum because a paved sidewalk runs through it at the wide end, but it's not a park. Would you sit on this on a folding chair and read a book? Would you say to someone, "I'll meet you at that park at East Broadway and Elm?" No, you would not.

However, it's doing better than the other Google result for "Connecticut's smallest park," because that is a) a State Park, and therefore in a whole different category, and b) in the middle of Gardner Lake. That's not a park, it's an island. And between a traffic island and an island island, I'm going with the one on land.

Posted by Johnna Kaplan at 8:53 AM