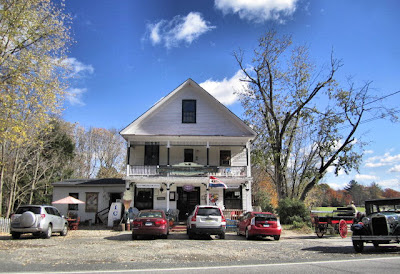 The General Store is adorable. Isn't it? It would be even more apparent how adorable if the vintage car on the right of the photo wasn't obscuring the horses hitched to that wagon.

But as a teenager, I did not want the Mansfield General Store to be my primary choice for Sunday brunch.(If it even existed back then, a million years ago.)

Of course there's nothing wrong with going to school in Storrs, but I didn't want to study agriculture or any of the other things UCONN excels at. I wanted to go to a school in a big city, a school with one of the nation's top drama programs. I did not want to go to school where there were cows. True story: my parents took me to see one school, not this school, and on the way there we saw cows. We didn't bother to even get out of the car.

There's another reason why I wasn't willing to forgo the dreams I'd had since childhood, magically acquire a car from who knows where, and pack myself off to Tolland County at 17. To the adults of authority in my school district this was where you shunted the students you didn't care about, the ones you thought wouldn't amount to anything. And being told I wouldn't amount to anything, which was a pastime of many of my teachers, only made me more determined.

In the end I did go to a school in a big city with one of the nation's top drama programs. A school entirely free of cows.

And now I live in eastern Connecticut and drive around on country roads and admire general stores and say to myself happily, when I see a cow, "Cow!" So maybe somewhere, all those teachers and administrators and counselors are snickering.

Posted by Johnna Kaplan at 8:06 AM