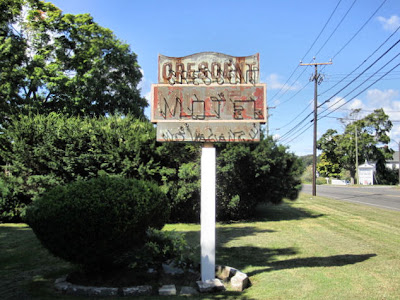 Finally. I was getting somewhere. I hurried through New Haven where Route 1 jags and twists, more an obstacle course built to confuse than a road, and East Haven, which the Guide describes ambiguously as "receiving the overflow from many of New Haven's expanding activities." I glimpsed Lake Saltonstall, where a gentleman of that venerable Connecticut family once spent an angry day stranded by the tide after a dispute with a ferry-woman. I passed into Branford, always nicer than I remember it being, always inexplicably merging with Westbrook in my mind. (Branford was named for Brentford, England, because...who needs spelling?) Then on to Guilford, where Route 1 passes north of the picture-perfect center of the town.

This was the part of US 1 that I knew and loved. 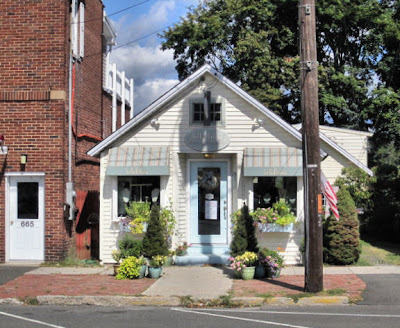 This was the Connecticut of toy-sized boutiques on dainty Main Streets, of enormous lobsters on top of diners, of rickety shoreline motor inns with hokey signs like portals to eras past. The Guide went on about certain ancient salt-box houses once owned by important people, but practically every house was lovely, painted in perfectly contrasting New England colors, and historic - with a plaque to prove it.

And about those houses:


"Many Madison houses include one of Connecticut's usual domestic features, the cat-hole. The Yankee, always thrifty, deplored the necessity for holding doors open on cold wintry nights for the house cat to go out and in. Some early craftsmen cut a round opening in the lower panel or rail of a door, fitted a swinging cover over it and solved the problem by teaching the family tabby to push her own door open. Some cat-holes have a little peak-roofed portico to protect them from the weather."

I have never seen one, but I've never carried through with my plan to sneak through all the backyards of Madison looking for one, either. 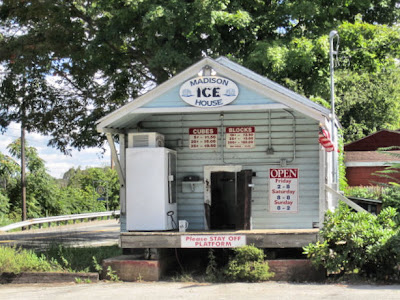 In Madison, the Guide said, "Early industries were fishing, shipbuilding, and the burning of charcoal." And, "US 1 proceeds past many restaurants and hotels where 'shore dinners' are a specialty." And finally, the ultimate travel-writer-fatigue sentence, the sentence you get when you finally abandon all hope of coming up with the right words: "Occasional water scenes and rural landscapes offer diversified scenery." 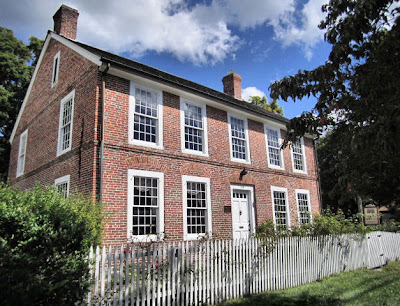 Next was Clinton, about which the Guide says, "The manufacture of Pond's Extract from native witch hazel cut in back-country brush lots and sometimes distilled in backwoods stills, is the town's chief industry."(Today the chief industry may or may not be outlet stores.)

I've driven this road many times, but this was the first time I took time find out what exactly this brick building is. It's called "Old Brick" or the Elisha White House, and belongs to the Clinton Historical Society. It was built in 1750 and is "the oldest brick house on the shoreline from New Haven to New London." The Guide doesn't mention it, possibly because the length of this Tour was giving the writers a headache. (It gave me a headache.) They do mention a milestone placed along the "highway" by Benjamin Franklin, and a detour down a road "lined with tiny fisherman's cottages" which today leads to the Town Beach. 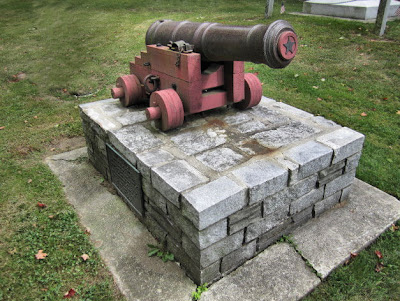 They also note this cannon on the Green - it looks even smaller in real life than this picture conveys - which they say was "used by Gideon Kelsey in his single-handed defense of the local coast line against the British invasion of 1812." Clinton's role in the war of 1812 is, well, not something people really mention a lot, as opposed to that of Stonington (heroic and improbable), Madison (feisty and clever) and Essex (oops.) But apparently something happened here. The above plaque claims this cannon "saw service during the war." Another account has Kelsey shooting at a British ship in the Sound with his "old king's arm," i.e. not a cannon. In any case, if some nutty Republican ever makes it mandatory for everyone to own a gun, let me just say I want this one. So cute! 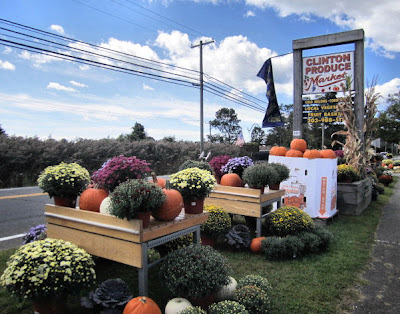 As I made my way east along the old Post Road, there were signs of fall that didn't quite match up to the still-warm temperature. 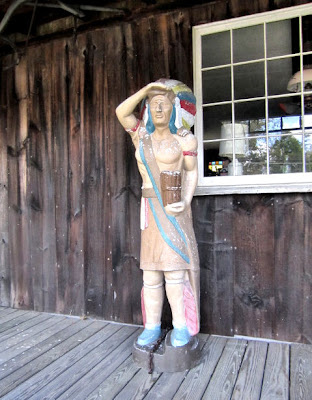 And in Westbrook, which Route 1 zips through pretty quickly, there was...this.

Old Saybrook, which then had a population of just 1,643, was conspicuously left out of the itinerary, and mentioned only as the place where US 1 - not yet I-95 - crossed the "broad stream" of the Connecticut River. 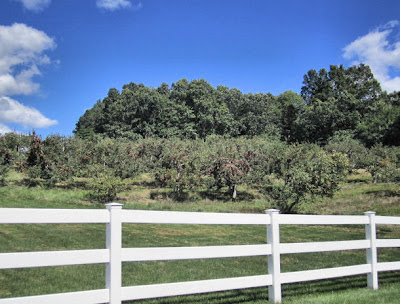 On the other side, the Guide told of an Old Lyme invisible to the modern eye. There was something called the "Mile of Roses," which I thought an ephemeral thing to include in a guidebook; the "hamlet of Laysville...once the center of a small woolen industry"; and the Stone Ranch Military Reservation, which is still there (and called Stones or Stone's Ranch) but, appropriately for a Department of Defense training site, not exactly advertising its presence.

In East Lyme, there were white fences and apple trees, each with a different-colored fruit.

Waterford was more egregiously snubbed than Old Saybrook; there was no mention of the town at all. Waterford is rather large to ignore completely, and in doing so you run the risk of looking like you've forgotten it, which would be embarrassing. I wondered if someone there had been unusually rude to the writers.

And then I was home, in my "historic maritime town" of New London. But there were still a few miles left to go.

Posted by Johnna Kaplan at 8:21 AM