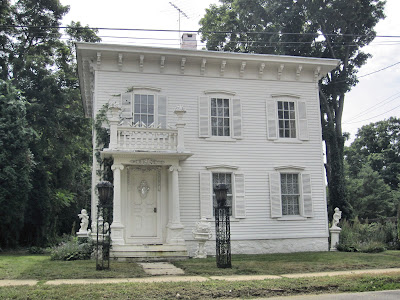 Well, I thought I'd get lost in Bridgeport, but I didn't. In fact I did something even worse: I assumed I was lost when I wasn't. So I gave up and got on the highway, thinking of this line. But though I felt guilty for skipping a part of Route 1, since the Tour doesn't deal with anything in major cities anyway I convinced myself that it wasn't the worst part I could have skipped. I took a Stratford exit I was not familiar with and wound up, entirely independent of my own volition, where I was supposed to be.

Which wasn't Route 1. "US 1 enters Stratford on Stratford Ave. and turns left onto Main St.," the book says. Which is a lie. In reality, Stratford Ave. is Route 130, and Main Street is 113. I'd encountered this problem in previous Tours. Either Route 1 had been re-routed, or the FWP writers had gotten it wrong (maybe driving through Bridgeport had tired them out.) Or maybe, as I had amused myself imagining before, they just wrote this whole thing while drunk.

But whatever had happened back then, Route 113 was clearly the place to be. A long row of very pretty houses, not all of which were made of fondant like the one above, led to the town center. This area was a surprise to me, because my previous visits to Stratford were, as I've mentioned before, frequent but not at all varied. 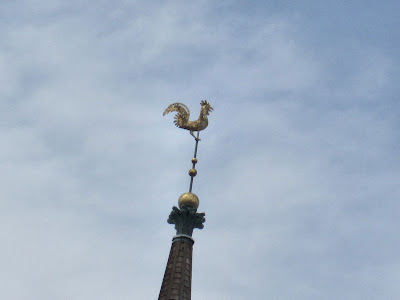 Everything the Guide wanted me to see was here on Route 113, including the first Episcopal Church in Connecticut, Christ Church, with its "weathercock from the spire of the original building, which still bears the bullet holes of British marksmen under Colonel Frazier who, when quartered here in 1757-58, amused themselves by using the chanticleer as a target." 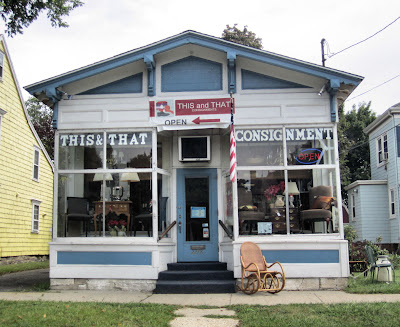 When the Guide was written, Stratford had moved from "shipbuilding and oyster fisheries" to "considerable manufacturing." This part of it seemed to get by on historic buildings and little shops that made me smile for no particular reason. When those ran out, the road once again joined with Route 1 to cross the Washington Bridge over the Housatonic into Milford. 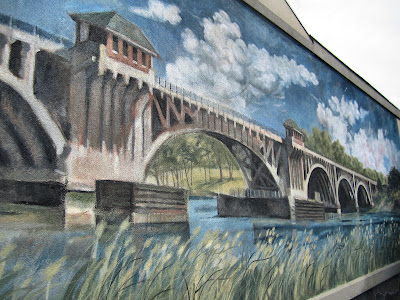 Or, I should say, Devon. Devon, like Lordship, is one of those place names you think exist only on highway signs. Except they all do exist. I crossed the bridge depicted in this mural and there I was, in Devon. Looking at this mural. 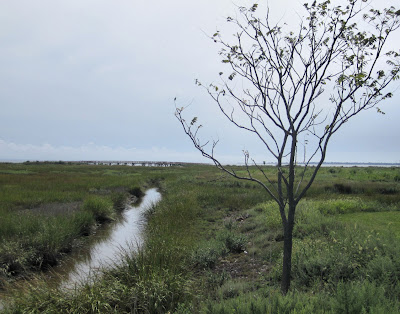 Now I was supposed to look for "the junction with State 122," which would lead me past "sandy flats where shore birds may be seen feeding. From the tiny bays and coves along this shore oystermen put to sea to harvest a crop from submerged lands..." This was either a FWP writer giving up, as I had with my Bridgeport detour, or simply a description of a lost world. But there was a place I knew that sounded sort of like this: Silver Sands State Park. It was Route 162, not 122, that dipped South into this fragile watery part of Milford, but I didn't care.

I suddenly wanted to revisit the elevated boardwalk of Silver Sands, where many years ago I'd had what seemed like hours of existential discussions that went nowhere, only down the looping boardwalk and back again. (Which reminds me that a good part of my teenage years were spent driving back and forth on the Post Road in the wee hours of the night drinking Dunkin' Donuts coffee.)

And perhaps because my life now has slightly more purpose, Silver Sands was nicer than I remembered. Though the oyster fleet that "flourished" here in 1938 has moved on.

Later I found that Route 162 had indeed once been Route 122. If Bridgeport and Stratford had broken my Sense of Connecticut (that's not exactly a title for a best selling book-turned-movie, is it?) then Milford had re-calibrated it. 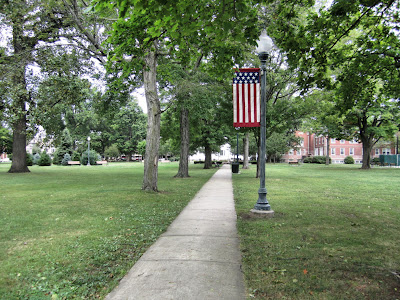 I drove east, through Woodmont, "a summer colony" and borough of Milford where I glimpsed the promise of the water at the ends of the cross streets.

Then I was in West Haven, where upon reaching the "large Green which was presented to the town by Shubael Painter in 1711" I recalled I'd been before. West Haven is a bit like Wallingford. I have nothing bad or especially good to say about it, it just doesn't quite seem to belong, entirely, and - obviously - its central area is not particularly memorable. West Haven's history, though, was far more exciting, according to the Guide: once "the home of General Tom Thumb, celebrated midget," the town "was the scene of a raid by the British on July 5, 1779, when General Tryon brought 3000 redcoats ashore, pillaged the church, burned documents, and looted the town."

Next was New Haven, and the Shoreline beyond.

Posted by Johnna Kaplan at 8:41 AM