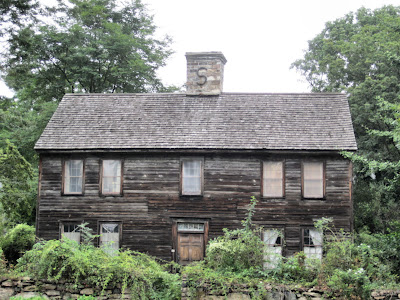 It was almost exactly a year ago that I first started doing these Federal Writers' Project Tours. I realized when flipping through the Guide that the way I had been doing them - at random - was probably not the best way to go. So I decided to go back and start at the start. That is, Tour 1: From New York Line (New York City) to Rhode Island Line (Westerly), 117.1 m., US 1 and US 1.1.

I'd avoided Tour 1 mostly because it took up over 19 pages, which seemed like a major commitment. Even split into two sections - Sec. a. is Greenwich to New Haven, 47.8 m and Sec. b. covers the rest of the way to Rhode Island - it was a good deal of time to spend on what is now a slow, local road.

The Tour begins with the origins of the Route 1, a Pequot path through the wilderness turned first Colonial postal route between New York and Boston. (We've been stuck between those two for a long time.) After the first post rider in 1673 came travelers. (Or, technically, travellers.) The Guide quotes one of them, Madam Knight, who found on her trip in 1704 that "The Rodes all along this way are very bad." Route 1 was not for the timid in the 18th century. "In going over a Bridge under which the River Run very swift, my hors stumbled, and very narrowly 'scaped falling over into the water, which extreemly frightened mee." Madam Knight judged the route as being full of "Buggbears to a fearful female travailer."

Confident that my own trip would be far less frightening, I got on the 95 (speaking of "buggbears")  and drove to New York. (Not New York City as the title promises, but Port Chester.) The few blocks I had to travel to get onto Route 1 and re-enter Connecticut ended up being a knot of confusion. I'd never been so happy to see a sign for Greenwich.

As soon as I passed the sign, though, I realized there was another reason I'd avoided this tour so far: Route 1 is really boring. It is, especially in the Western part of the state, where we put the stuff everyone needs but no one expects to be pretty: drug stores, chain restaurants, and other assorted sprawl. Sure, every so often there's a little historic downtown, but for the most part the Post Road is the opposite of what people think of when they imagine Connecticut is all high class and fancy and stuff. In 1938 this was not the case, it seems, but things have changed. And I wouldn't recommend a drive along the Post Road in western Connecticut for any purpose other than seeing what those changes are.

That said, Greenwich. I admit that before reading Tour 1, I never thought of Greenwich as a particularly blood-soaked place, but I have now been schooled in the Colonial-era carnage of the Panhandle. In Cos Cob, "the Dutch and English united to annihilate the Siwanoy tribe...not a man, woman, or child of the several hundred inhabitants escaped the fire set to their wigwams on a bitter February night in 1644." Near the Stamford line, Indians scalped a Dutch family; the father lead the attackers towards a cliff where they 'blindly rode their horses over the rock and all went crashing to their deaths at the jagged base." During the Revolution, "this entire district was preyed upon by lawless bands of bushwhackers called 'skinners,' who owed allegiance to neither side." And now there are the hedge funds...

I'd also never realized that the name of the Byram River is derived from its past as a place where Indian traders would buy rum. Buy rum...Byram...get it...OK, moving on.

I quickly saw that most of the Guide's points of interest were either missing or so obscured by time and development that though I was following the letter of this tour, I was missing its spirit. I was looking for old mill sites and salt box houses and Indian burial mounds. But my notes showed a different Greenwich:

-Ferrari/Maserati dealership
-Buildings look like they belong in New York State more than CT. Heavy, stone, pointy. (Is Greenwich some official architectural transition zone?)
-J. McLaughlin, Crumbs, Whole Foods, traffic
-Is that a Millbrook Police SUV? (That must mean there's a Millbrook, then?)
-Is that a cobbler called the Cos Cobbler? How cute! Oh, it's just a restaurant. Sad face.
-Mill Pond Shopping Center has a Dooney and Bourke-esque duck logo. (They paved history and put up a strip mall named after it?)

At this point I checked my progress on my phone and the little blue dot representing me driving along had ominously turned grey, like Greenwich was trying to erase me. I could see signs suggesting the presence of potentially tourist-worthy attractions, but they all pointed away from Route 1, requiring detours.

Finally I saw something the Guide mentioned, the site of the former Conde Nast Press in Old Greenwich. Then it was a "modern industrial plant." Now two large stone pillars remain, like squat obelisks, chiseled with titles of magazines.

The roadside landscape grew aggressively drab, like an abandoned post-Vogue no-mans land, and then suddenly I was in Stamford. Specifically, Stamford's West Side, which had its own welcome sign. (And possibly its own musical.) The FWP had one thing to say about Stamford: "a large proportion of the residents are commuters to New York." Then I remembered another reason I'd put this, and all the longer tours, off for so long. The Guide is organized so that driving tours are in one section ("High Roads and Low Roads") and cities and major towns you might actually want to stop at are in another ("Main Street and Village Green.) In order to see what it recommends in those places, you have to turn to a whole other section of the book, where you find pages of attractions, enough for a stay of several days. By the time I remembered this I'd driven through the West Side, into Stamfords's shiny core, and out again into the East Side.

I crossed into Darien, "a residential town within the metropolitan district of New York City." Here, the Guide warned, "local constabulary are especially efficient." I worked in Darien once, many years ago, and the local constabulary had never bothered me. Then again, I had always made sure to leave as soon as work let out, if you know what I mean.

But then my contemplation of sundown towns was interrupted when I caught sight of another of the Guide's extant attractions: the oldest house in Darien. The Weed Homestead (that's it up there in the picture) was built in 1680. In 1938 it was "open as an antique shop, and inside can be seen the 'gunstock' corner posts, the huge summer beams, and the stone chimney front exposed on the stairs." It did not appear to be open as anything these days.

I passed through Noroton, where my parents, to amuse themselves on Metro North trains when I was little, convinced me no one lived. And downtown Darien, where Tour 1 intersects with the much shorter Tour 1A.

I drove through Norwalk, a big-box blur, and Westport, which the Guide had boiled down to artists, loyalists, and smugglers who "lived happily" on "ill-gotten wealth."

I passed the Great Swamp Fight monument by the Dunkin' Donuts in Southport, which looked as dangerous to approach now as it had last year, and continued through Fairfield. Here the book goes into rather lengthy detour and digression concerning the Greenfield Hill area, where one of my favorite completely random Connecticut objects lives. But I didn't have all day, so I kept going. I did, however, pause to appreciate one quote. "...until 1796, all the little schools in the outlying districts of Fairfield were under the control of the citizens of Greenfield Hill....School meetings were violent affairs, attended by everyone in the township and, sometimes, in the case of a tie vote, men ran from house to house, routing out the hired men to vote and break the tie."

Route 1 may have become almost unrecognizable since 1938, but small town Connecticut politics had remained reassuringly constant over 200 years later.

Ahead was Bridgeport, the "foremost industrial city of the State." I got ready to get lost.

Posted by Johnna Kaplan at 8:45 AM