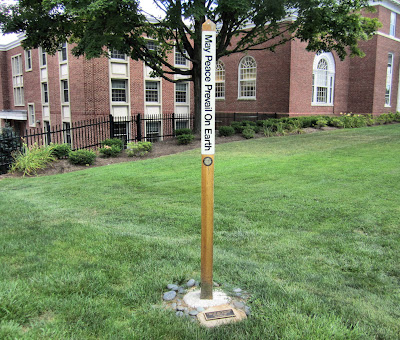 And when I saw this, planted in the grass in front of a church beside the Noah Webster Library in West Hartford, I thought it definitely fit into that rubric. Where else but a town like this, I thought, would people honestly believe a piece of wood with a little message printed on it could change the natural, millenia-old tendency of humanity to fight amongst itself? (And I say "a town like this" with eye-rolling affection, having grown up in a place that prides itself on earnestly protesting various world conflicts, despite the fact that its entire experience of war consists of having been a jumping-off point for William Tryon.) So upon seeing this thing I a) burst out laughing in the middle of the sidewalk, then b) walked across the grass to take a picture of it.

But I was wrong! Completely, utterly wrong! This thing is a Peace Pole, and a crazy number of them (possibly 200,000!) have been erected in 180 countries around the world. The concept originated in Japan in the 1950s. They come in four, six, or eight-sided versions, with the same plea for peace written in a different language on each side. This one was of the four-sided variety, and the other languages were Spanish, Hebrew (Everywhere!) and Hindi. I'm not sure how I've escaped seeing one until this late date, and I'm pretty sure I will now see them all over. (But don't worry, I won't chronicle them here.)

After I walked away, I noticed that my little outburst of hilarity had drawn two other people over to examine the pole. They were reading it aloud, probably wondering what could possibly be so interesting or amusing. As it turns out, not much - the only funny part is I now spend so much time thinking about Connecticut that I assumed something universal must have been entirely home-grown.

Posted by Johnna Kaplan at 6:56 AM