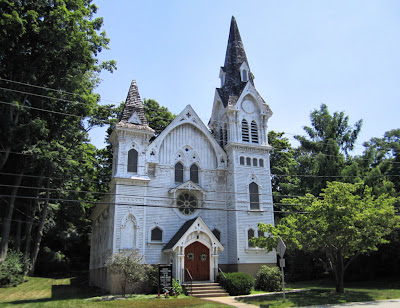 How to describe Middle Haddam. It's is a part of East Hampton, and fittingly confusingly named. It has more than one rather spectacular church. It has streets named Blacksmith and Shipyard. But that's not it, not entirely. It feels ancient in the same way many Connecticut River towns do. Settled in the 1700s and bound by the geography of river and landing, it has the silent unchanged feeling that hangs over inland ports and always feels to me - with my coastal ways - quite mysterious. But there has been change here. Today, if not for the river and the street names and the ship on the Historic District sign, that mysterious feeling would be the only hint that the brigs and schooners built here once connected Middle Haddam to the West Indies, New York, trade, adventure, and war. 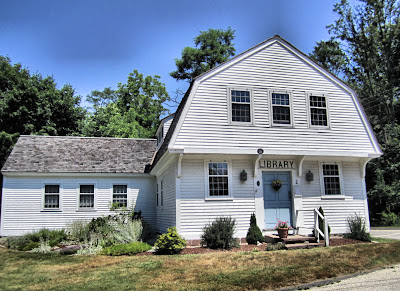 While I was taking this picture of the library, which in past lives was a store (built in 1799) and a private home, a butterfly alighted on my finger. Then it flew away, and I was waiting for birds to pop out of the trees and burst into song. But at that point a fly came along and landed exactly where the butterfly had, so I figured I wasn't leading a charmed fairy tale life after all, but had just spilled a drop of juice on my hand. 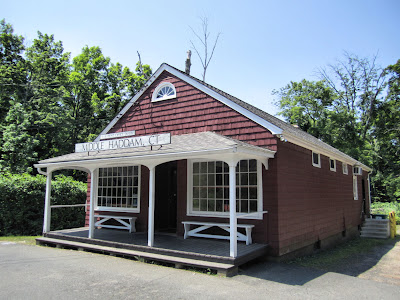 And yet...this is the old Post Office. And it's for rent. I could totally live in a post office in Middle Haddam, right? Surrounded by looming churches, beside the gambrel-roofed Library, high on the bank where the steep narrow streets struggle up from the river where they once built boats that sailed the world. Where butterflies would land on my fingers, and the birds would almost burst into song.
Posted by Johnna Kaplan at 7:43 PM