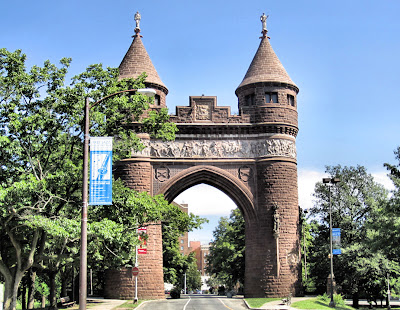 In years past, I think my relationship with Hartford was not unlike that of many Connecticut residents who don't live in or near the capital. I went there sometimes, but only because I had to, because that's where certain government or cultural institutions were. I almost never went for Hartford itself. I considered the city (if I considered it at all) a bland place, featureless except for the magnificent, gleaming State Capitol building. I may, at times, have made somewhat disparaging remarks about Hartford, or wished it was a little more like someplace just slightly less generic.

Oh, I knew there were nice parts, and less nice parts, places to be avoided. But mostly I just thought the city was nondescript. Then I started to realize that, as I increasingly drove through Connecticut's capital on my way to somewhere else - usually muttering something to myself like "Why can I see the highway but not get on it??!" - that I was comparing little isolated bits of Hartford to other cities. Oh, that block looks like Pittsburgh, I'd think, or maybe Philadelphia, or Albany.

I suddenly realized that wasn't right. A state as varied and fascinating and weird as the one I was slowly coming to know couldn't really have a capital that was just an amalgamation of other cities, a city that could play any other city in a movie, like Toronto. I must be mistaken, and I'd have to make a serious effort to find out the truth.

But the last time I went to Hartford, it seemed to have separated itself from those other places, without any work on my part. As I navigated the, shall we say, idiosyncratic street grid past dignified buildings and intricate graffiti and what seemed like an extra helping of statues, I didn't see those half-remembered cities at all. I only saw Hartford.
Posted by Johnna Kaplan at 7:45 AM