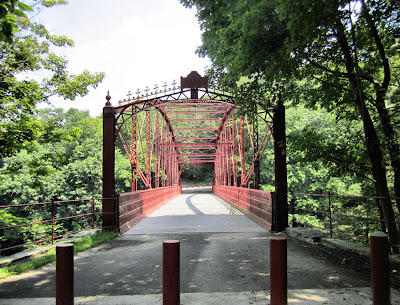 If I hadn't already learned to be routinely flabbergasted by Connecticut, I'd be a little surprised to be posting about my second red wrought-iron lenticular truss bridge of the summer. 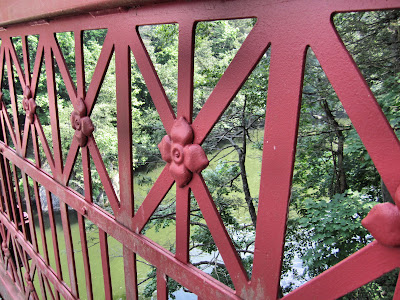 This one crosses the Housatonic River in Lovers Leap State Park in New Milford. Like the one in Meriden, it was built by the Berlin Iron Bridge Company. It was constructed in 1895 and open to vehicular traffic until the 1970s, which is a little worrisome to think about as you walk over it, because a few sections seem to wobble just a bit under your feet. These day cars use a regular, modern, boring-looking bridge parallel to this one. 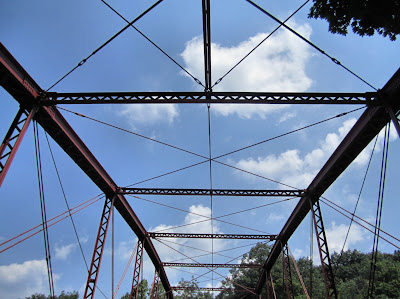 The important thing here, though - obviously - is not so much the background of this (admittedly awesome) bridge. It's the question, "Why Lovers Leap, and why no apostrophe?"

The name comes from a nearby rock outcropping. "From here," the DEEP says, "tradition has it, that the Pootatuck Indian Chief Waramaug's daughter, Princess Lillinonah, and her lover plunged to their deaths."

The teenage princess was beautiful and sweet and all the eligible men from every surrounding tribe came to vie for her hand. (Yeah, we hate her.) But then one day while walking through the woods she came across a sickly, pathetic white boy. (And we've all been there, right?) She helped him to her father's palace and, against Waramaug's wishes, nursed him back to health. When he had recovered they decided they were completely in love and must be married. But Waramaug said, essentially, Hell, no. So Lillinonah stopped eating and grew closer to death, and finally her father gave in. White Boy decided he would return to his colony for the Winter and return and marry her in the Spring. Unsurprisingly, to those of us who have been there, he never showed. Lillinonah became despondent. Waramaug thought he might cheer her up by arranging for her to marry a Pootatuck brave named Eagle Feather, but that didn't exactly work. Instead, his daughter cast herself and her canoe into the river without a paddle. And as she drifted perilously along towards a cataract, she saw him - White Boy - standing on the bluff above. She capsized just as he dove to save her. After their bodies were found together at the bottom of the rapids, Waramaug had them buried side by side on a hill overlooking the river.

So yes, alright, that is actually very sad. And I don't know about the missing apostrophe. 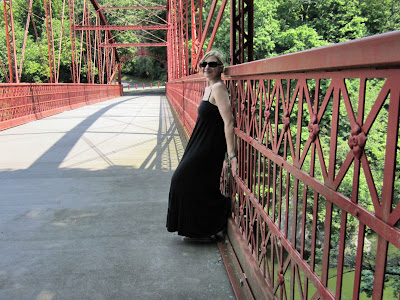 Back to the bridge. To show some scale, and illustrate how cool this thing looks when contrasted with a contemporary human, I posed on it in what I thought up until I saw this photo was a flattering dress. Which is perhaps more sacrifice than this blog deserves, but there you go.

In other news. Wednesday morning I was a guest on NPR's Where We Live (along with Stephen Wood of the excellent Connecticut Museum Quest and historian Bill Faude) talking about various and sundry Connecticut things. You can listen here.

Posted by Johnna Kaplan at 7:16 AM