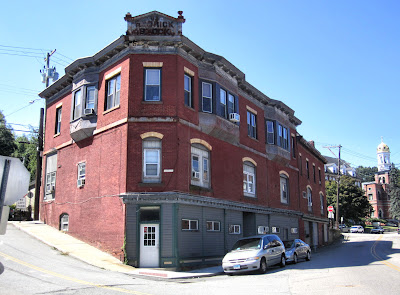 One reason I'm forever going on about how more people need to come to eastern Connecticut is that this is a region where you will never, ever, no matter how much time you spend exploring either on purpose or by mistake, cease finding truly strange things.

So I should not have been surprised to find that Sprague has been holding out on me. There's this flatiron-y building, and a whole town center that's part old mill village, part Wild West street in search of a tumbleweed, part I don't even know what. (It's sort of Jewett City-esque, but different.)

Specifically, the area I'm talking about is Baltic, one of three villages in Sprague. The other two are Hanover and Versailles. (Just force yourself to stop thinking about Europe right now, because if you do it will make even less sense than it does already.) 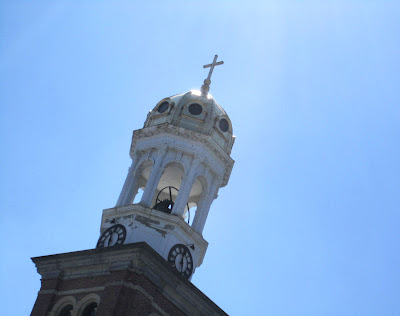 The shiny dome of this Catholic church is visible from quite a distance as you leave Sprague and head north towards Scotland. If you glance back after crossing the bridge and ascending the hill, you can see it glinting like a gilded ball caught on a high branch of a tree across the Shetucket River below. 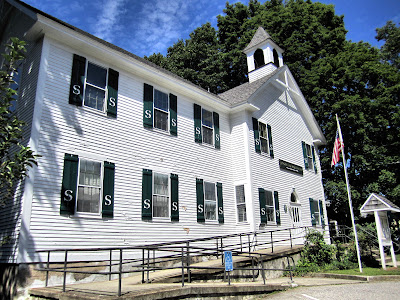 This is the Scotland Town Hall. It's on Devotion Road, just south of where it becomes Pudding Hill Road. Both are better (and less adorably) known as Route 97.

So, Scotland. I've always driven through it on 395 and never - until now - on these pretty back roads. I didn't avoid it on purpose, it just happened that way. But I might have avoided it on purpose if I'd ever stopped to think about it, because Scotland has the distinction of being the first town in Connecticut in over 50 years to host a KKK rally. Pointy-sheet-covered morons burned a cross in a pasture here in 1980.

Other towns, like Meriden and Danbury, saw Klan marches - and, as in Scotland, counter-protests - in the 80s. And when America's largest Klan faction moved its headquarters to Connecticut in 1986, it was because its new Imperial Wizard (seriously, how silly are these titles?) lived in Shelton.

But Scotland, so rural and so easy to drive through without really driving though, seemed different. Who could tell what or who was still hiding in those deceptively calming rolling hills? 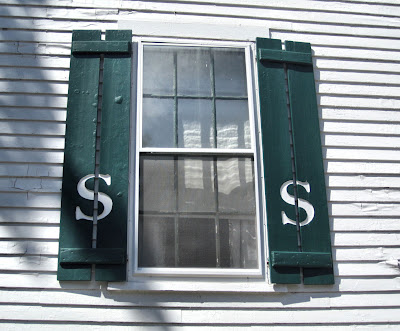 I got out of the car and in a sort of cowardly blogger counting coup move, took this close-up of these S's, which I hope stand for Scotland. No one seemed to care. 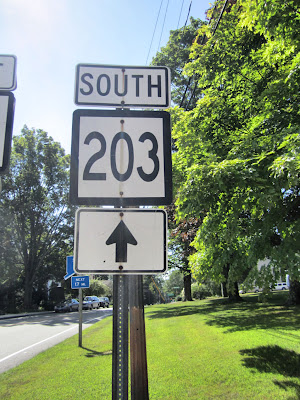 Moving (or fleeing) on to Windham. The fact that there's a Route 203 in the 860 is really pleasing to me in a way that might not be comprehensible to anyone who doesn't spend far too much time thinking about Connecticut. 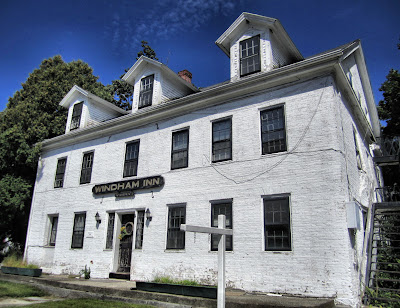 Also in Windham is the Windham Inn, built in 1783. It's said to be haunted by the ghost of a young woman, but what old inn isn't? It occurs to me that you could do really well marketing an old Connecticut inn as "Connecticut's only non-haunted old inn." 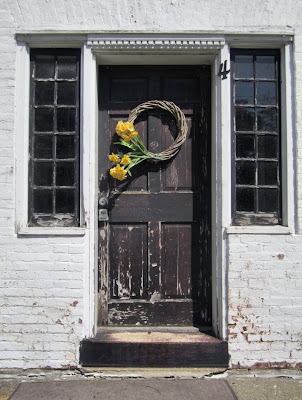 The Windham Inn was later converted into apartments.The best thing about it, I think, aside from the fact that it almost looks as if it's been shot with a fish-eye lens even when it hasn't, is the door. As is often the case.

Posted by Johnna Kaplan at 8:06 AM