Q. What does Meriden have in common with Kansas?

A. They're both places I have only been to by mistake.

The Kansas mistake was just because of a wrong turn in Missouri, but the Meriden mistakes - oh yes there have been several - were due to the fact that Meriden is a sucking vortex of vehicular doom, disguised as a normal town. You're just driving along on some lesser highway, or some other type of road you think is going to feed into a highway, and all of a sudden, bam! Meriden. And you drive in confused circles wondering how you got there and more importantly how, and whether, you can ever get out again.

Meriden has a nice city hall with a shiny dome, and some other stately yet not particularly inspiring buildings nearby. But other than that...well, it must have its nicer areas, but what you recognize instantly when you go there by mistake is that this is not exactly the part of Connecticut that needs to be in the brochures.

However. I went there on purpose recently for the first time and though I'm still not going to recommend anyone take a vacation there, I did find a few Things That Make You Go Hmmm. 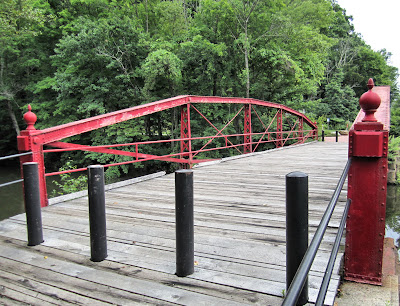 1. The Red Bridge, a lenticular pony truss bridge dating from 1891. It replaced a series of earlier wooden bridges. 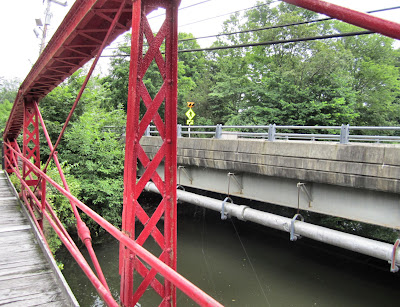 It remained in use until 1964, when the modern bridge beside it was constructed. It crosses the Quinnipiac River, on what was once the main route between Meriden and Cheshire. 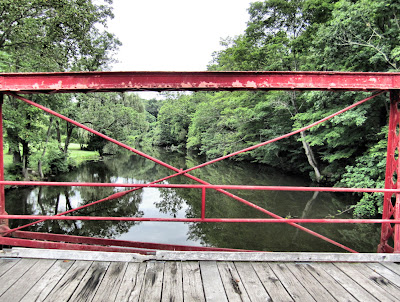 It was built by the Berlin Iron Bridge Company, which constructed hundreds of bridges across the country. 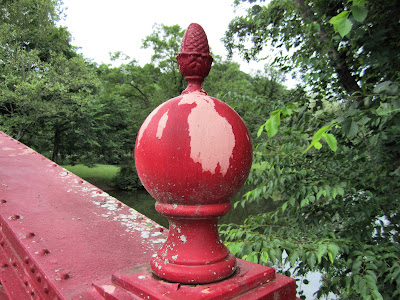 Of the seven iron bridges that have been erected in Meriden, only this one survives. 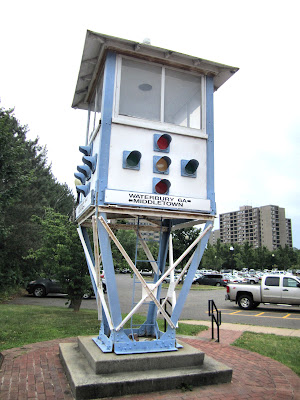 2. This alarming thing, the Meriden Traffic Tower. It was the latest in traffic control when it was first installed in 1925, and quickly became a beloved emblem of the city. (Personally I think if I was driving along in my Packard or whatever and saw that thing flashing at me up ahead I'd be afraid and try to turn around.)

But now, as a harmless curiosity, I think it's great. It's situated on a one way street near an arrangement of roads that makes traffic circles look like little wheels of stress-relieving bliss. It's actually pretty much in a parking lot, but if you happen to miss the parking lot on the first go-round you'll get a free mini-tour of Meriden while trying to get back to it again. Though it's worth it, because what other town has one of these deals?

(I also went to Castle Craig, which is (I think; I don't have statistics on these sorts of things) probably the reason why most non-residents-of-Meriden go to Meriden. I'll save that for Monday though.)

Posted by Johnna Kaplan at 8:34 AM