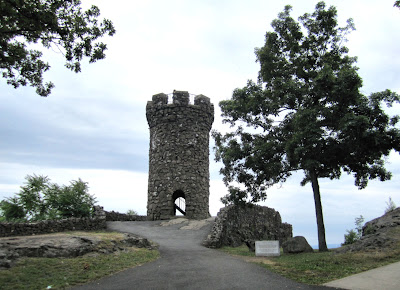 Continuing on the "curious things you can find in Meriden" theme, here is Castle Craig. Castle Craig is obviously not a castle, first of all. It's a tower. Just ignore your inner four year old that's asking "But whyyyy is it called a castle?" (If you have an actual four year old, just...distract them with something.)

To reach Castle Craig you drive into Hubbard Park, neat and green and meticulously landscaped, centered around a large lake with multiple fountains. It's practically Midwestern. (This is totally a compliment.) And then you keep driving. You might think you're immediately going to drive up, but what you do is drive along...and along...and over the river and through the woods and over some more woods and some more woods until you wonder if maybe you're lost. Which would be embarrassing. The roads within the park technically have names, in a theoretical, Google Maps sense, but there are no signs. In fact, except for a sign at the gate near the park's swimming pool, nothing on the way to the tower is marked. You just have to guess, and go slowly on the narrow two-way road - especially where it crosses the water on a low bridge - and remember to turn left at the fork. And then, eventually, you'll be in a parking lot, surprised to find that you've ascended 976 feet. The parking lot is right below the tower; Castle Craig, like the Fox Hill Tower in Vernon and unlike Haystack Mountain in Norfolk, is a lazy-person attraction. (Though you can hike up here too, if your knees are better than mine.) 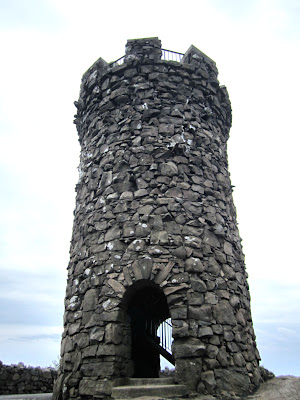 And that's it. A very un-New-England-y looking stone structure 32 feet tall, it was built by businessman and philanthropist Walter Hubbard (the surrounding parkland was his gift as well) and presented to the city of Meriden in 1900. (I use that phrase, "built by," but it always bothers me a little; of course it was built by men Hubbard hired to build it. It's like when people say Thomas Jefferson was a farmer.) No one knows exactly what the tower is meant to resemble - some say it was inspired by a Scottish structure, some say Norman French, and another theory points to the Turks. 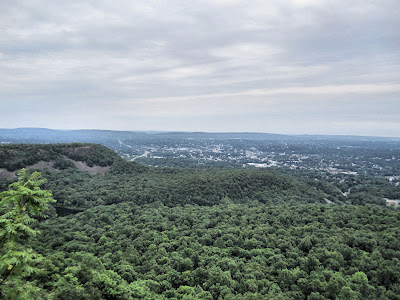 The tower stands on the East Peak of the Hanging Hills, the Meriden section of the Metacomet Ridge, which extends from northern Massachusetts to the Connecticut coast. There are several macabre associations with the Metacomet Ridge. Another part of the ridge, north of here, is called Lamentation Mountain. And there's a story, told very creepily in the book mentioned in this post, about a little black dog that haunts the cliffs. According to this myth, the first time you see the dog you will experience great happiness. The second time, you will be incredibly sad. The third, you will die.

Metacomet, by the way, is sometimes called Metacom and is the same person as King Philip, who you might know from his eponymous war. 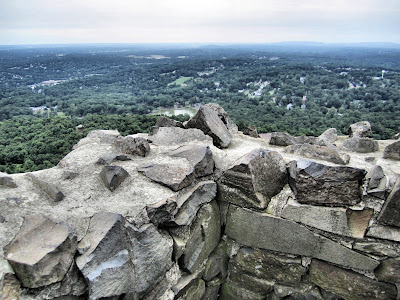 This is the only stone wall I've ever seen that is not flat or mostly flat on top, but actively pointy. At first I thought it might be to scare off invaders trying to scale the mountain, or rather to playfully appear as if it could do that. Then I remembered my college library, which had a high balcony from which people often flung themselves to certain death on the first floor below. (Well, maybe not often, but it doesn't take too many incidents like that before a place develops a reputation.) The balcony had a railing topped with little spikes, and it was rumored that these were there to deter jumpers, along with the odd pattern of the floor, said to appear jagged from above. Then I thought maybe the angry-looking wall was a sort of 3-D version of a "Do Not Sit On Wall" sign. In any case, the unusual stones ended up being almost more interesting to me than the looming cylinder they enclosed. 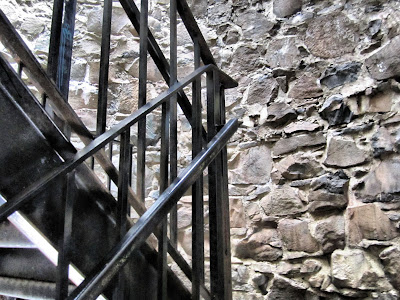 Though the tower is not very tall, you can't come to a place like this without climbing as high as you can, so I went up. 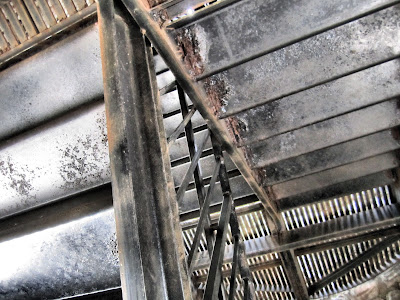 The stairs are metal and decidedly not Norman, Scottish, or Turkish. And the landings are slatted. So if you're a lady who normally likes to wear skirts, you might want to go with pants instead. (I make these mistakes so others don't have to.) 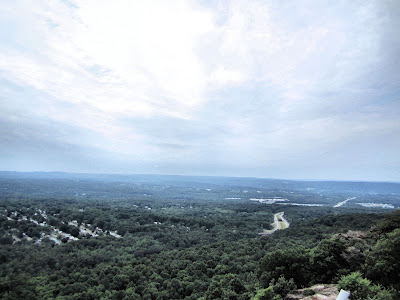 From the top the view is...pretty much like the view from the base, really. Though it was only from this vantage point that I noticed the little cars on the little road in the center right. I wondered idly if they were lost, in the process of being sucked into Meriden by mistake. Then I realized I didn't even know what town they were in, or how far away they were. I decided that from up here (where you can see Long Island and Massachusetts on a clear day, which this day was not) it didn't really matter.
Posted by Johnna Kaplan at 8:41 AM