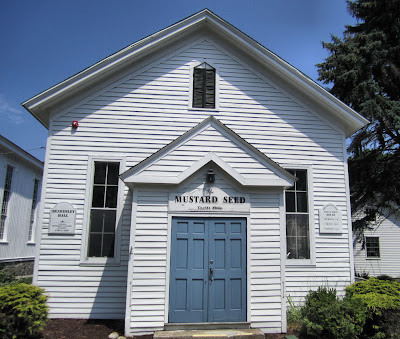 I've never written about Monroe before, and I couldn't think of anything to call this post except The Monroe Doctrine, which seemed so obvious and cheesy and unrelated to the post's content that I decided I couldn't do it. But there's not really another catchy phrase with "Monroe" in it. So I gave up.

The reason I stopped to check out this building had nothing to do with what it is, or what it used to be, and only a little to do with the fact that it's all cute and historic-looking. I stopped because of the Mustard Seed sign over the door. Long ago, in a career far away, I once played a fairy in an outdoor production of A Midsummer Night's Dream. I remember my sparkly eyeshadow, and my black platform sandals from Payless, and I probably remember a lot of everyone else's lines, because Shakespeare has a way of taking up permanent residence in one's brain. But I have no idea which fairy I was. It could have been Mustard Seed. But then again it could have been Peaseblossom. I'm pretty sure it wasn't Cobweb, because that would have mildly terrified me. But I wasn't thinking about all that when I suddenly caught sight of this sign and turned around to see what the building was. It was just that something about "Mustard Seed" appealed to me.

It turns out the Mustard Seed Thrift Shoppe is owned by the Monroe Congregational Church, which is right next door and which is also a very pretty historic building - actually far more distinctive than this one, but I always prefer buildings that look like you could hitch them to your car and drive off with them in the night. The church was built in 1847, though there had been a meeting house on the Monroe (then New Stratford) Green since the 1700s.

The sign on the front says "Beardsley Hall," and under that, "Former Monroe Centre School, Circa 1830." And so another old schoolhouse finds me. The schoolhouse, according to the Church's website, was purchased at auction in 1935. It was used to expand the existing Beardsley Hall, dating from 1886, and if you walk around to the side you'll see that this is indeed part of a much larger building, and not really as tow-able as it appears from the front.

Unsurprisingly, I found out after I left Monroe that the town has another old schoolhouse, located very close to this one. Of course if I'd gone to Monroe with the intention of finding schoolhouses, I would have found that one but not this one. That's the Monroe Something, I guess.
Posted by Johnna Kaplan at 7:58 AM