Judging a Bridge by its Cover 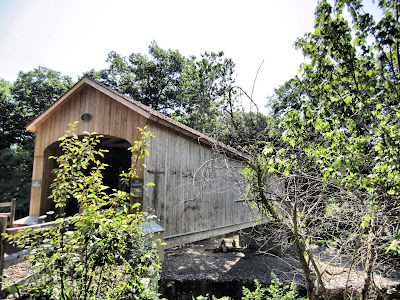 The Comstock Bridge, which crosses the Salmon River from East Hampton to Colchester, is one of those attractions I've seen written about a lot by official touristy type people and always questioned whether or not it could really merit all that hype. Well, maybe not hype, this is Connecticut after all, we don't get that excited about things. But there's a lot of "Yay, covered bridge!" sentiment out there, and I was skeptical.

It's not as if there's anything to dislike about covered bridges. I love the look of the one in Chatfield Hollow State Park. And the one in West Cornwall, which unlike this one you can - nay, have to - actually drive across, is also very pretty. Although it's a bit terrifying. It's dark in there, and there's only one lane, and you have to just have faith that no one's going to come barreling along in the other direction. (Oh, whoops, there is something to dislike about them.) But I'm not obsessed with them as many people seem to be. (It's not like they're old schoolhouses or anything.) And so I wasn't expecting very much from the Comstock Bridge. 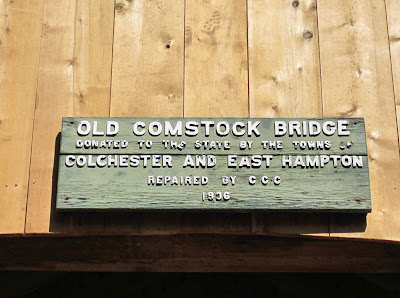 But then I got there and the damn thing just defeated my cynicism. Partly because, well, just look at it. But also because of the dedication that's obviously gone into preserving it. It was built in 1873, replacing an 18th century version, and must have been helped to survive in various ways before being repaired by the CCC in 1936 and overhauled again just recently. It was "donated to the state" by the towns it connects. (Which are in different counties.) Can you even imagine the number of committee meetings that would have to take place for such a thing to occur today? 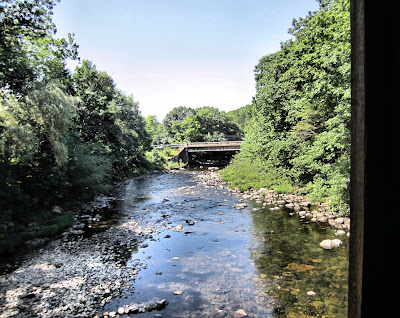 One option would have been to cross the bridge on foot and keep going onto the Salmon River Trail, but as a lazy person in flip-flops and a dress I decided my time was better spent gazing out at the rocky shores of the river through the little windows. 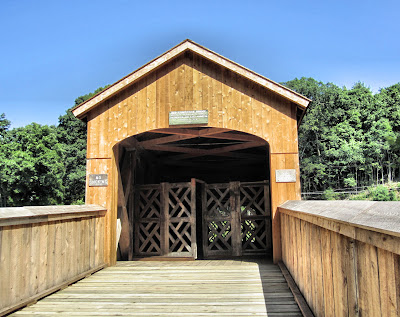 Inside, the bridge still smelled of fresh wood. There was something very barn-like about it. My first thought, as I walked across the floor, was that someone should hold a dance here, an old-fashioned barn dance, with paper streamers and lemonade. 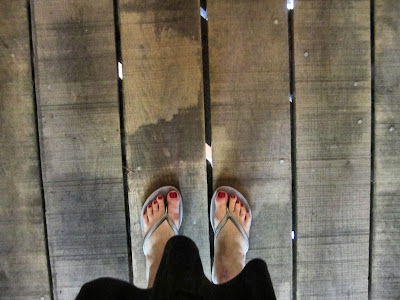 Little darts of light reached up through the floor-boards, the flash of the sun on the water's surface below ricocheting up towards my feet. 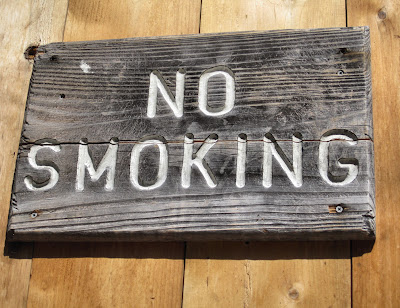 It was a fragile-feeling structure in a way, as if made of air as well as wood. It seemed incredible that in all those years some storm hadn't turned it into a giant game of pick-up sticks. 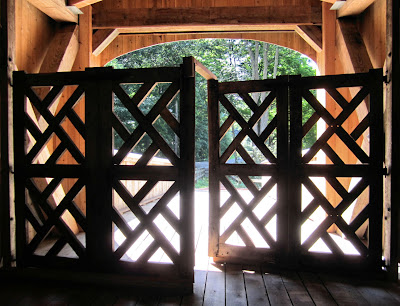 The signs near the bridge are full of information, much of it about the history of truss bridges, and I assume anyone who cares about that would prefer not to hear it repeated by me. I personally prefer factoids like: "During the American Revolution, a legion of French cavalry under the command of the Duc de Lauzun, some 300 horsemen in all, camped on the east side of the river at this location, before continuing on to join up with George Washington's army in Phillipsburg, NY." And: "In the 1700s and 1800s, bridges took on the name of some family that lived nearby. People may have initially referred to it as 'the bridge near where Comstock lives,' and then it got shortened to 'Comstock's Bridge' or 'Comstock Bridge.' Christopher Comstock was a long-time resident on the East Hampton side of the river in the 18th century, dying at his farm in 1808 at the age of 82."

And this, on the reasons why covered bridges are covered: "One common name for covered bridges was 'kissing bridges,' suggesting that their dark interiors provided an ideal place for young lovers, away from the prying eyes of their elders...But the fundamental reason for covering a bridge...was to protect the timber structural members from the weather..." What is left of my cynicism appreciates that.

Posted by Johnna Kaplan at 8:49 AM