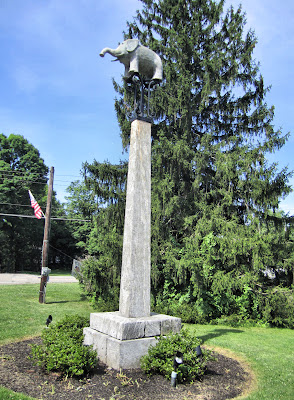 You may be wondering, why is there an elephant atop this pillar? Or you may already know, because it's quite a well-known pillar-topping elephant, though I learned about it only recently. This is another New York post, but I can't get away from Connecticut as easily with this one. For one thing, I only found out that this town - Somers, NY - even existed because it kept coming up while I was reading about Somers, CT. 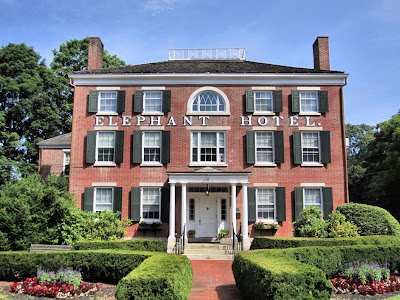 And for another, the man who built the Elephant Hotel (which is now the Somers Town Hall) links back to a famous figure in Connecticut history.

Hachaliah Bailey, early 19th century circus leader and owner of the famous (and rather tragic, if you ask me) elephant Old Bet, is not the Bailey of the Ringling Bros. and Barnum & Bailey Circus. That was James Anthony Bailey, who wasn't technically a Bailey at all, but after being given a job by the nephew of Hachaliah Bailey as a young orphaned boy, he took the family's name. He later became the manager of his own circus, and then he met P.T. Barnum, and you can basically figure out the rest of that. 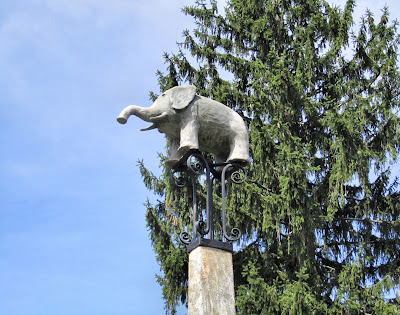 Barnum's larger than life presence still pervades Bridgeport, and though there is a statue of him there and another in Bethel, his birthplace, neither of those places - nor any other town in Connecticut, to my knowledge - has an adorable pachyderm on a post. (There's a very cute elephant statue in Deep River, but it's not up in the air. And in trying to prove it's the only one, I found this, which is, well, I think it's funny, but I'm really easily amused. Scroll down for the Connecticut section.)

By the way, Somers, NY has a recurring elephant motif. They're on signs and so on. It's quirky and sweet, and they're probably sick to death of people driving over from Connecticut (a relative latecomer to the whole circus business) to take pictures.

Posted by Johnna Kaplan at 7:07 AM