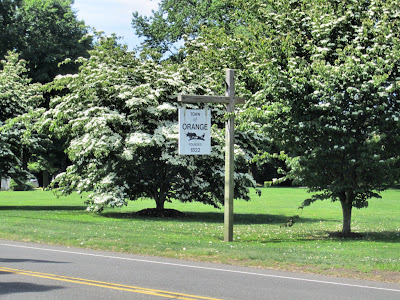 The entirety of what I knew about Orange, until very recently, could be summed up in two words: Olive Garden.

In High School, for reasons lost to the WTF's of time, my friends and I would sometimes drive to Milford to eat dinner at Chili's. I really can't imagine why, now, except that maybe just the act of driving to Milford was the point. It was close enough that it wasn't really a big deal, but random enough, and far enough away, to escape from the familiar and avoid seeing anyone we knew from school. We almost always ordered a certain kind of chicken strips, which came with fries and which I suppose were good in a disgusting, fried way that only 16-year-olds can appreciate. The thing about the chicken strips was that you could also order the same meal with fish instead, and sometimes the chicken would arrive at the table and...well, it was chicken, but it tasted suspiciously fish-like all the same. And though my friends and I spent a lot of time at the local art house theaters and in the Foreign section of Blockbuster, apparently we'd never seen a German movie, because we called this mysterious Chili's offering "ficken."

Eventually, when we'd grown sick of Chili's (which amazingly took more than one visit to Chili's) we took the leap, and crossed the town line into Orange, which had...(drum-roll)...the Olive Garden. And then I went off to college, and real life, and never returned to Orange again except sometimes to go to the DSW. And that was that. 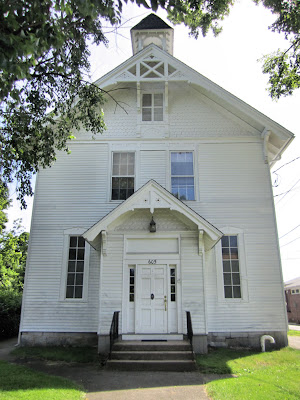 Until it wasn't. Because now I'm aware that Orange - shockingly, I know - is more than a strip of Post Road next to Milford. (It used to be called North Milford, though.) The name Orange comes from Prince William of Orange, Glorious Revolutionary and successor of James II, who was the evil one who demanded the Charter which was then hid in the Charter Oak, blah, blah, why the hell didn't you teach us all this in Middle School, you useless pack of now-retired losers?

And, Orange has an old schoolhouse! Called the Academy, it was built in 1878 to replace an earlier school on the same site. It was later used as the Town Hall and the offices of the Board of Education. 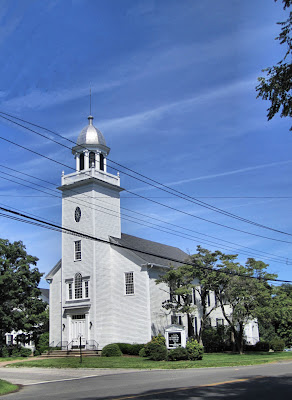 And, like with many Connecticut towns, you can come for the schoolhouse and stay for the church. This one is the Orange Congregational Church, built in 1810 after the North Milford congregation spent I don't even know how many years walking four miles each way to Milford to attend church. It was the shiny sliver dome that caught my attention. Gold would have been somewhat unusual but silver, I don't think I've ever seen. The architect, David Hoadley, who also built several other notable Connecticut churches, was self-taught.

So if this post had a moral, I guess it would have to be: always remember to look beyond the all-you-can-eat bread sticks and salad.
Posted by Johnna Kaplan at 8:48 AM