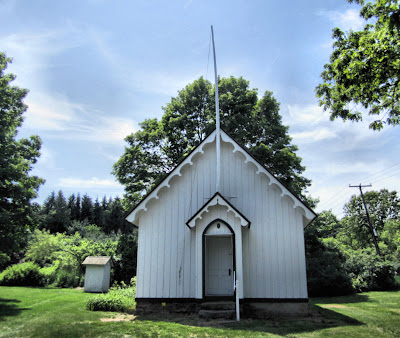 Usually I like these old schools for their simplicity. Nothing is added except what is necessary: four walls, a roof, a door, a few windows. This one, the Pine Grove Schoolhouse in Avon, previously known as School Number 7, I like for its embellishments. I like that someone in 1865, when it was built, seems to have thought that a schoolhouse could - or should - be decorated, like a little cake.

"The pupils walked to school carrying books, slates, and tin dinner pails. They took turns building a fire in a bench-type stove. Girls sat on the left and boys on the right." The building served as a school until 1949. Later, it was used as a library, among other things. 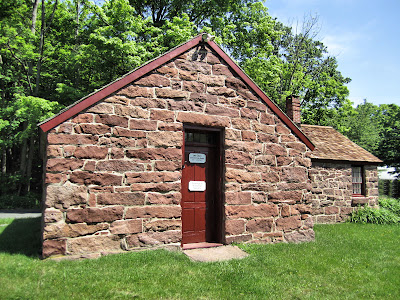 This is a very different school a few miles away. The Old Stone Schoolhouse, in Farmington, was constructed in 1790. The builders seem to have thought a school should be solid, and possibly last forever. Looking at this school, I realized how improbable it is that all the other old schools still standing have withstood all the hurricanes and Nor'easters of the past few hundred years. After ending the school chapter of its life in 1872, the Old Stone Schoolhouse was used as a chapel.

There is a quiz about the schoolhouse, but, perhaps as an homage to the forgettable nature of the information usually included in school quizzes, there are no answers.

And: I've added a "Schoolhouses" tag, to put all of them (I hope I haven't missed any) in one place. I almost called it "Schools," because I thought people might Google "the size of connecticut schools" and get this blog and a list of wee 18th century school buildings, and that would be funny. But I didn't.
Posted by Johnna Kaplan at 10:17 AM