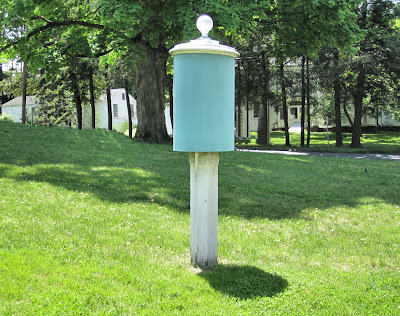 I'm going to call this the Farmington Mystery Thing. It's not as mysterious-looking as the Kent Mystery Thing, but I have no idea what it is, or was. It's probably something entirely mundane, like some sort of call-box or other thoroughly practical object. I am fond of it, though. But then I'm fond of almost anything painted this shade of blue.

I just started reading a book about different sorts of Connecticut mysteries. Legendary Connecticut: Traditional Tales from the Nutmeg State is, so far, not what I expected it to be. When you spend a decent amount of time reading about Connecticut and its strange ways, both for business and pleasure, you think you've probably heard all the weird old yarns. I mean, it's not that big of a state, how many legends could it have? Yet, surprisingly - or not surprisingly - there are many in this book I'd never heard before. And more than that, they're of a different tenor than I've come to expect from my previous reading in the Ye Olde Nutmeg State genre. Defiant and clever patriots, I expect. And fierce, conflict-prone Indians. And women who manage to work within the strictures of their time and place while rebelling, and subtly proving their strength. But, while religion and weirdness was a given, I wasn't expecting Jemima Wilkinson, the young woman who "died" and then rose up as a charismatic preacher to lead her devoted followers on a pilgrimage through several states, eventually founding what would become Penn Yan, NY. And I'd somehow never heard of Lorenzo Dow, the itinerant (and widely thought crazy) preacher renowned for dramatic performances and bizarre personal quirks.

The stories are odd, and some are tragic. One doesn't really think of Connecticut as fertile ground for tragedies, but there's the former slave who no one cared for and who cared for no-one but his "faithful horse;" there's the man who wandered through the countryside for decades, always believing his long-dead bride would meet him at any moment. And there are more. There is, too, the tolerance that struck me when I first read about Sarah Bishop: these small-town people with such strict notions of Christianity and proper conduct managed to overlook far stranger behavior than anyone in our much more open-minded world would today. I still have most of the book left to read, but my "review" so far is just to note that it still amazes me how much this little state expands with every new bit of information about it I consume.

Now if only I could find out what that damn thing in Farmington is for...
Posted by Johnna Kaplan at 8:26 AM