Salem. No, the Other One. 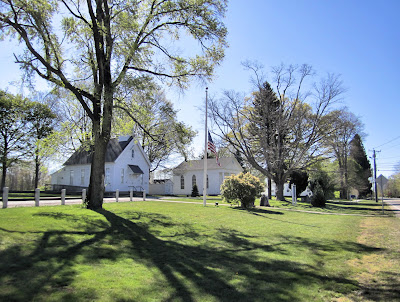 This is the Town Green on Route 85, aka Old Colchester Road. It's shaped like a half-oval and lined with perfect little white structures. The buildings just North and South of the Green, some public and some private, are also white, as if enforced by an unspoken agreement about modesty and taste. You can walk along the driveway that circles the Green on a weekday morning and hear nothing for minutes at a time, nothing but your own footsteps echoing and crows calling to each other as if amplified in surround sound. 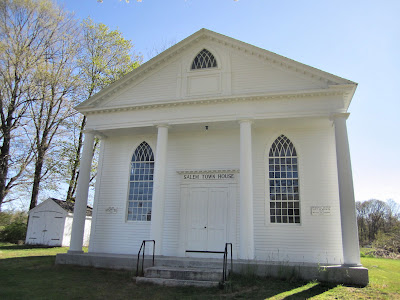 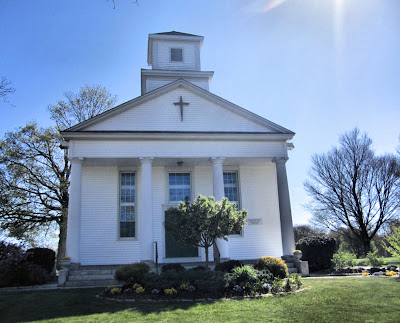 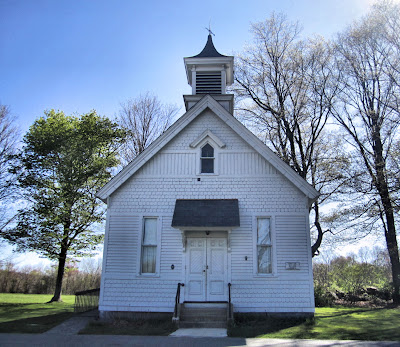 And the plaque on this old schoolhouse reads, "Center School Circa 1885."

There's something especially poetic about Salem, even compared to other Connecticut towns that seem to appear alongside the road as if out of a time-preserving fog. Simple Wikipedia sentences about it, picked at random, sound like snippets of fables:

"This land, once called Paugwonk, had been jointly owned by a Niantic Sachem named Sanhop, a Mohegan named Chappattoe and another kinsman from Uncas. The combined area became known as Fairy Lake Farm..."
"...the large stone mansion he lived in at the farm is still standing today at the end of Horse Pond Road, though it is abandoned."
"Salem has always been a crossroads town."

Salem is also known for being the home of the Music Vale Seminary. There is a historic marker, across from Music Vale Road. It says, "Site of Music Vale Seminary, First Music Normal School, 1835 - 1876." (A Normal School was one that trained teachers.) Music Vale, the first school in the country to give degrees in teaching music, was founded by the wonderfully named Oramel Whittlesey. He was born in Salem in 1801; his family made pianos. The students frequently performed for the public. The Hartford Courant sounds a bit dramatic when writing about Salem too: "During the Civil War, Whittlesey flew the American flag and fired a cannon at every Northern victory. He also offered discounts to widows and daughters of dead soldiers." The school burned down twice; the original when a special effect involving gunpowder went wrong, and its replacement by a chimney fire.

There's a lot to say about Salem, and to find in it. Too much for one blog post, anyway. Connecticut can be overwhelming that way: you think that the pretty strip of historic buildings along the main road is all there is to a town, and then you find there's so much more, and it could take you days and weeks to begin exploring it. And that's just for a town incorporated only in the 19th century, with only a few thousand residents. The New York Times, in an article about the second burning of Music Vale in 1897, records that "there came to be a legend attaching to every spot of interest, and in all the wild country about not a nook was there that the 'girls of the vale,' as the farmers called them, had not explored and named."

Another place crossed off the list simply to be added on again, a place with no witchcraft (real or imagined) but with a quiet sense of some other kind of magic.