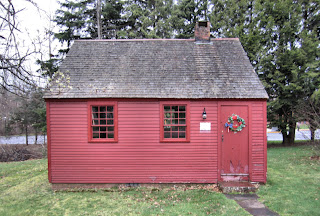 I've mentioned how much I hated school and yet how fond I am of old schoolhouses. They tend to sneak into my blog posts, like this one about the Naugatuck Valley. They're in some of my non-blog writing too, like this column about one tiny red building in East Haddam that had a brush with fame, and this one about a more obscure - but equally cute - tiny red building in Waterford.

The tiny red building above, the Keeney Schoolhouse in Manchester, is a bit unlike most others around the state, because it's merely a replica. It's more authentic than it sounds, however, because it's a replica made with wood from the original building. So it's like the schoolhouse version of the Ship of Theseus,  or...something. The original was built around 1751, in a different location, and this one was reconstructed in 1975 out of lumber salvaged from its damaged predecessor, which had been used as a farm building after the end of its school days.

When I noticed it (I have an odd radar for these little things) I immediately deviated off-course because I had to see it up close. (Luckily there's a paved driveway and parking area here; when I spotted the schoolhouse in this post, I had to park in a little dust-and-gravel patch in the middle of an intersection.) As I went towards this diminutive structure, it seemed to grow even smaller, shrinking to almost toy-like proportions. I looked at it, with its colorful wreath and two little scrunched-up windows, and then, because I couldn't actually pick it up and put in it my pocket, I drove away.

Posted by Johnna Kaplan at 8:48 AM