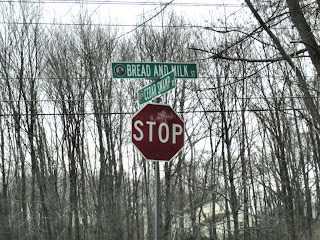 In Coventry there is a street called Bread and Milk. The same day I discovered that, I later found myself on another road, called Camp Meeting. I don't know the origin of Bread and Milk, I am only assuming that it is as old as the very oldest streets in almost every Connecticut town center: School Street, and Church Street, and so on, all the essentials of Puritan life laid out on a miniature grid. It took me a while to appreciate the literalness of these roads. On School Street you will always find a school, or if not, you could have found one at one time. On Church Street, and Meeting House Lane, the same. There are some more poetic street names in Connecticut, the Witches Meadows and the Fog Plains, where a bit of mystery intersects with the mundane. But to the people who named them, those must have been mundane too.

Perhaps the street-namers of the 17th and 18th centuries had no time for the evocative or inspirational; perhaps they simply valued the quickest and most practical directions to - and descriptions of - where they needed to go. I could understand that. Most directions I get, when I bother to get directions instead of just muddling along with a Rand McNally atlas and the little map in my phone, are terrible. If they were more like "turn right at Big Red House Street, then left at Dunkin Donuts Without a Drive-Thru Lane, then left again at This Must Be Hell When It Snows Hill," I'd appreciate it. Anyway there are enough Prospect Streets with no prospects, Elms and Maples devoid of trees, Mountain Views and Buena Vistas that turn out to have neither.

I'm working on a theory about those early New Englanders, though: that all of their actions, the seemingly incomprehensible as well as the boringly predictable, can be explained if you consider that they were constantly terrified. Walking through the woods of Coventry, scared of witches and Indians and sin and catching a cold that might kill you and the possibility of all manner of wild animals leaping from behind the trees, maybe it was just comforting to look up and see, well, not a green and white town street sign, but some recognizable landmark that told you, Ah. I know this place. This is the place where you can find bread and milk.

Posted by Johnna Kaplan at 8:21 AM